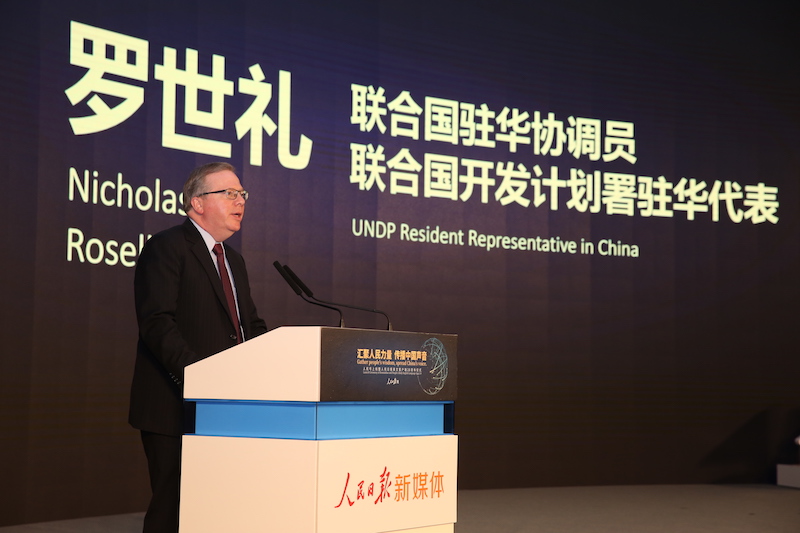 Nicholas Rosellini, UN resident coordinator and UNDP resident representative, delivered a speech on Monday at the launch ceremony of Renminhao and the English language app 2.0 of the People’s Daily, the flagship news outlet of the Communism Party of China.

He expressed gratitude to all the staff at the People’s Daily for the service they have provided to the Chinese people.

"I want to thank the People’s Daily for their continued support of the UN and their commitment to sharing the stories behind sustainable development — through their integrated media platforms the important message of the UN and our partners has reached over 700 million users," said Rosellini.

Speaking highly of China's poverty alleviation achievement, he highlighted the important role the People’s Daily has played in sharing China’s compelling and innovative stories and lessons learned in poverty alleviation practices to both China and overseas.

The UN official also praised the CPC news outlet in advocating UN information by saying, "The People’s Daily has also been instrumental in communicating the 2030 Agenda for Sustainable Development."

He expects media to give a voice to marginalized people in the realization of the 17 Sustainable Development Goals set in the 2030 Agenda.

At the end of his speech, Rosellini said he was honored to witness the People's Daily launch the new version of its English language app and the Renminhao new media platform, which will respectively play a significant role in telling China's stories and sharing China's experience to the world.