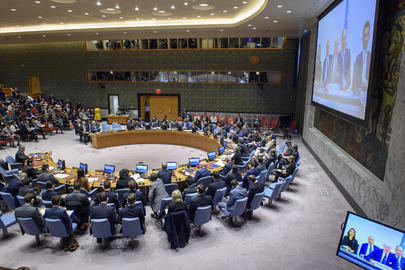 New York (People’s Daily) – Days after an alleged chemical weapons attack in the Damascus suburb of Douma, the United Nations (UN) Security Council failed to adopt two competing resolutions that would have established a mechanism to investigate use of such weapons in Syria, as well as another concerning a fact-finding mission in the war-torn country.

The first draft considered today – penned by the United States – which would have established a new investigative mechanism for one year, as well as identify those responsible for the use of chemical weapons, was rejected owing to a veto from Russia though it garnered the necessary nine votes.

The draft received 12 votes in favor, two against (Bolivia and Russia) and one abstention (China).

According to the UN Charter, a resolution will not be adopted if a veto is used by one of the Council's five permanent members – China, France, Russia, United Kingdom and the United States.

Similarly, a competing draft – penned by Russia – which would have established the mechanism for one year as well but would have given the Security Council the responsibility to assign accountability for the use of chemical weapons in Syria, was also not adopted.

Following the failure of the Russian Federation’s text, that same delegation tabled a third draft resolution, which was shorter than the previous two. In contrast to those texts, the third contained no proposal to establish an independent mechanism of investigation.

The Council rejected the third draft resolution – also proposed by Russia – which concerned the work of the OPCW Fact-Finding Mission.

Wu underscored the need to carry out an impartial investigation “that can pass the litmus test of truth”, stressing that there should be no prejudice to the outcome of such an inquiry.

Wu also called on all council members to remain united and insist that OPCW remain the main channel to address such issues. Wu reiterated China’s commitment to supporting Syrians, stressing that it opposed the use, or threat of use, of force in international relations, and supported Syria’s sovereignty and territorial integrity.  All council members should support a Syria-led and Syria-owned political solution to the conflict.