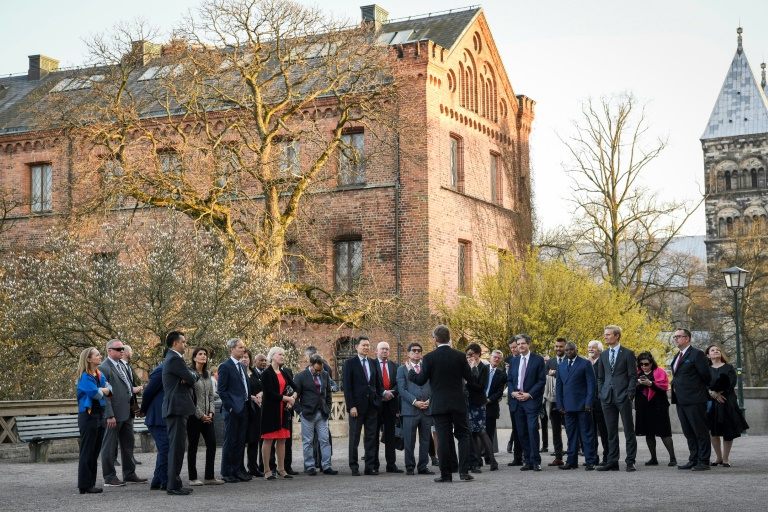 The UN security council is holding its informal meeting in Backakra in Sweden. (Photo: AFP)

The UN Security Council met in a secluded farmhouse on the southern tip of Sweden on Saturday in a bid to overcome deep divisions over how to end the war in Syria.

In a first for the Security Council, which normally holds its annual brainstorming session in upstate New York, the 15 ambassadors and UN Secretary-General Antonio Guterres were this year invited to hold an informal meeting in Backakra by Sweden, a non-permanent member of the body.

"We still face a very serious divide on that (Syria) matter," Guterres said as he arrived along with the ambassadors.

"We really need to find a way in relation to the violation of international law that the use of chemical weapons represents," he added.

The farmhouse is the summer residence of Dag Hammarskjold, the United Nations' second secretary-general who died in a plane crash in Africa in 1961.

Situated in the heart of a nature reserve, just a stone's throw from the Baltic Sea, the farmhouse consists of four buildings around a courtyard and has been completely renovated in recent years.

The southern wing serves as the summer residence for the Swedish Academy which awards the Nobel Literature Prize.

With both New York and Damascus thousands of kilometres away, the council is exploring "the means to strengthen and make more effective United Nations peacekeeping missions," the Swedish government said.

Swedish Foreign Minister Margot Wallstrom welcomed the decision to hold the meeting in Sweden, "where there is a long tradition of peaceful conflict prevention and resolution".

But she warned against being too hopeful the Syrian issue would be resolved over the weekend.

"Hopefully there will be some new ideas on the table and I think it’ll be on those tracks: the humanitarian situation, the chemical weapons," she said.

But "not even the beautiful settings like these can solve all the problems", the minister added.

Nikki Haley, the US ambassador to the UN, said on the Syria issue: "We're not having that much success, we're still deadlocked.

"Retreats like this are very important -- to get away from New York sometimes and discuss these things in a way that we can really try and find a solution."

British ambassador Karen Pierce said: "We are determined to try and find a workable solution, so we will keep doing that with our Russian colleagues."

While the war in Syria is not the only topic of the deliberations, it is high up on the agenda because it was an issue that divided council members deeply in recent months.

Skau said Backakra was a "fitting and inspiring venue" to reconnect with the power of diplomacy.

"It's a place to roll up our sleeves, take off our jackets and ties and come up with some real and meaningful ways forward," he said.

Air strikes by the US, UK and France on April 14 targeted three sites, which the countries argued were used by the Syrian regime of Bashar al-Assad for a chemical weapons programme.

Syria has been accused of using chemical weapons in an attack a week earlier in Douma, the last rebel stronghold near Damascus.

Assad and Russian allies have denied that Syria was responsible for the attack, which according to rescuers, left more than 40 people dead. But the Western powers insist that the Syrian regime had crossed a red line.

The air strikes, conducted without a Security Council resolution, have led to fierce tensions between Russia and the other permanent council members, the US, France, Britain and China.

Moscow has used its veto on the council 12 times since 2011.

A fact-finding mission from the Organisation for the Prohibition of Chemical Weapons (OPCW) to the Syrian town of Douma has finally arrived at the site of the alleged chemical attack, Russia's foreign ministry said.

Some non-permanent member countries of the council have been critical of the trip to Sweden.

With the conflicts the council has on its table, including the one in Syria, it is abnormal that the council would travel so far, said one ambassador, speaking on condition of anonymity.

"What will happen if something bad happens?" the ambassador asked.