HEADLINE UNESCO exit a loss for US, multilateralism

UNESCO exit a loss for US, multilateralism 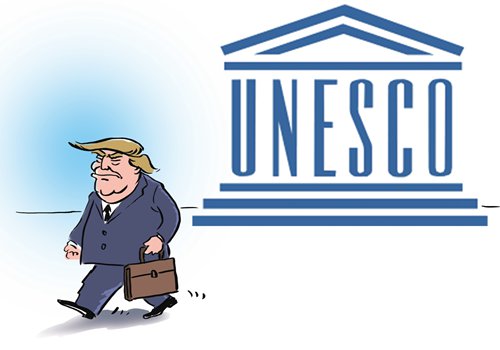 The US announced Thursday its withdrawal from the UN's world heritage body the United Nations Educational, Scientific and Cultural Organization (UNESCO). In a statement, the State Department said that the decision "reflects US concerns with mounting arrears at UNESCO, the need for fundamental reform in the organization and continuing anti-Israel bias at UNESCO."
Israel was greatly inspired by this decision and Prime Minister Benjamin Netanyahu praised the move as "a brave and moral decision." Irina Bokova, director general of the UN cultural organization, expressed her "profound regret" in a lengthy written statement.
UNESCO is committed to facilitating dialogue among different civilizations, cultures and nationalities on the basis of respecting common values. It has gained wide recognition around the world. Nonetheless, it has had a slew of disputes with the US. As early as 1983, the US withdrew from the agency during the Ronald Reagan administration, only to rejoin it under George W. Bush. Since 2011, the US has stopped funding UNESCO in protest against the organization taking Palestine as a full member.
Currently US arrears amount to $550 million and are estimated to top $600 million by the end of 2018 when the withdrawal goes into effect. That's not good news for financially struggling UNESCO.
The Donald Trump administration has been mulling over the pullout for months but it was deliberate to announce the decision exactly as a vote on Bokova's replacement was occurring. It appears Washington blames the agency for being too bureaucratic and politicized and wanted to avenge Israel, but in fact the US was dissatisfied with its role and position in this UN body.
Trump has been curtailing expenditures on international affairs and the withdrawal not only saves on costs but also delivers a signal of US authority to the next UNESCO head. Washington indicated its desire to "remain engaged with UNESCO as a non-member observer state." US officials revealed the decision could be revisited if the organization adopts corresponding reform.
UNESCO was prepared for the US withdrawal and its operations will not be much affected. Its current task is more to maintain morale and control damage. As Bokova said, the US exit is a loss to the UN family and multilateralism.
For the US, the withdrawal from UNESCO is not an individual case. Since Trump's inauguration, his diplomatic policy has distanced the US from multilateralism. With the belief in "America first," the president pulled the country out of the Trans-Pacific Partnership and the Paris climate agreement. And the latest move of this kind was his refusal to certify the Iran nuclear deal. President of the Council on Foreign Relations Richard Haass dubbed Trump's foreign policy the "withdrawal doctrine."
Trump has also condemned the North American Free Trade Agreement, questioned the US commitment to NATO and lambasted the UN at the UN General Assembly. The withdrawal doctrine is Trump's style of governance and an important way of addressing international affairs.
The establishment and development of a host of international organizations and mechanisms, notably the UN, could not have been done without US support. The international community has achieved a common consensus: that countries should cooperate with the principles of equality and mutual respect, safeguard world peace and promote prosperity. Even US presidents fully recognized the super power cannot solve global issues on its own and that multilateralism is the way.
This, however, does not work when it comes to Trump. His withdrawal doctrine runs counter to US tradition, not just shocking to the existing international order but also damaging Washington's reputation.
In recent years, anti-globalization has emerged as a rapidly developing trend across the world. Brexit and the US presidential election offer two pertinent examples. Populism and nationalism have dealt a heavy blow to international relations and more countries are placing their national interest above the overall well-being of the international community. This trend poses a serious challenge to world peace, stability and prosperity.
Multilateralism should actually be more cherished in tough times. As a deficit mounts in global governance, emerging economies represented by China and regional organizations like the EU are playing an increasingly crucial role. They have become the driving forces behind multilateralism and global governance.
Meanwhile, across from the Eurasian continent, the US is retreating into isolationism. Such behavior conforms neither to the mainstream development of international relations nor with the common aspiration of the world's biggest power. Moreover, it does nothing to help "make America great again."
In this sense, Trump's withdrawal doctrine is a loss not merely for multilateralism but also the US.

The author is an assistant research fellow at the China Institute of International Studies. opinion@globaltimes.com.cn