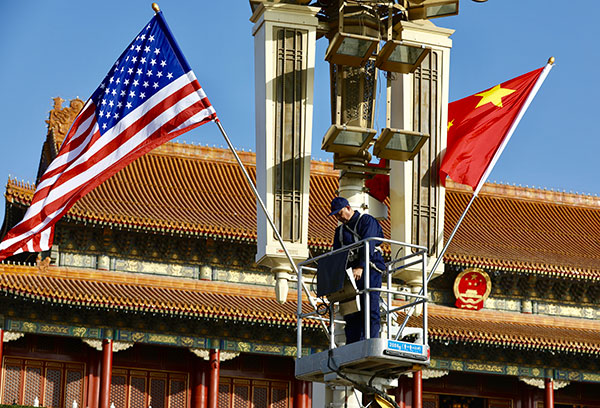 National flags of China and the US are hung up in Beijing, Nov 8, 2017. (Photo by Zhu Xingxin/China Daily)

China won’t accept any unilateral action imposed by its trade partners, said a Foreign Ministry spokesperson on Thursday, urging the US to handle trade friction in a cooperative and constructive way.

Chinese Foreign Ministry spokesperson Lu Kang made the remarks while answering a question regarding pressure from the Trump administration to adjust unbalanced trade relations.

White House Press Secretary Sarah Sanders on Wednesday confirmed previous media reports that the US officials are asking Beijing for a plan to cut the annual US trade deficit with China by $100 billion.

“If the trade relationship only benefits China, I don’t believe it can carry on till today,” Lu told reporters at a regular briefing.

“Recently, China has been talking and negotiating with the US about our trade problems. We hope to see both sides look into cooperation and take a constructive way to tackle trade friction,” said Lu.

To stem the rising trade deficit with China, Trump is reportedly seeking to impose tariffs on up to $60 billion worth of Chinese imports, and will punish China’s technology and telecommunications sector.

Stressing that trade war is in no one’s interest, Lu also warned that unilateral action is unacceptable and China will hit back to defend its legitimate rights if necessary.

“I believe two countries have the ability and sincerity to solve disagreements via friendly negotiation as we always have over the past 40 years,” said Lu.