Negotiators for both Germany’s public sector unions and employers signalled a willingness to compromise at the start of a third round of wage talks on Sunday, after more than 150,000 union members joined in warning strikes last week. 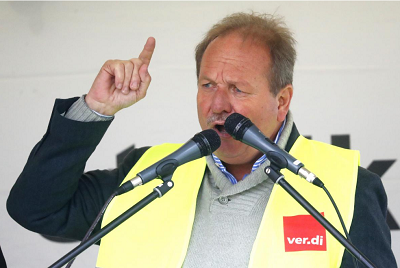 Trade union Verdi, with 2.3 million members, and the dbb association of civil servants, which represents 344,000 public servants, have been pressing for a pay raise of 6 percent, or least 200 euros more a month.

Employers have rejected that demand as too high, but said it was clear that public sector workers should benefit from strong growth in Europe’s largest economy.

“I hope we can get to a reasonable solution,” Interior Minister Horst Seehofer, leading the negotiations for the federal government, told reporters. “I hope that we can get it done in the next two days.”

“I have the impression that all the participants will try to reach a breakthrough in this round of talks,” he said. “We want to work together to find a solution that ensures fair and reasonable living conditions.”

He said the union would respond if employers decided to pursue a more confrontational approach.

Seehofer underscored the importance of public sector workers for German society, but declined to give details of the government’s counter-proposal.

Thomas Boehle, president of the VKA association of local employer organisations, told reporters that he also expected movement on the wage issue in coming days.

“I’m seeing a broad willingness to find a compromise,” he said.

Verdi’s Bsirske told the German newspaper Handelsblatt that surging German tax revenues meant the pay deal should definitely outpace the one from two years ago, when workers got an initial 2.4 percent increase, followed by a 2.35 percent increase.

In the industrial sector, 3.9 million workers agreed on a pay and flexible working hours deal in February that amounted to a roughly 4 percent rise per year for 2018 and 2019. Inflation edged up to 1.5 percent in March.