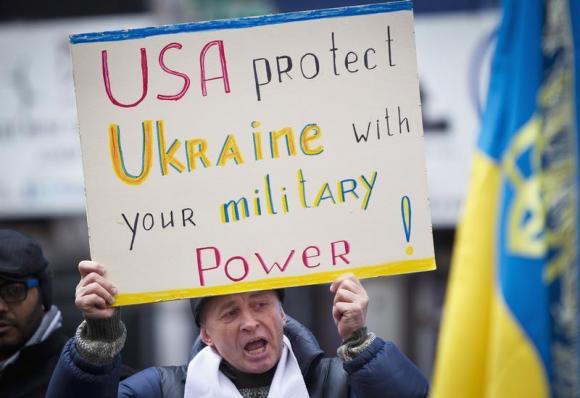 A Ukrainian in a demonstration. (Photo: Reuters)

According to the Washington Post, the US has approved lethal arm sales with a total value of $41.5 million to the Ukraine. Both American and Russian media comment that this may cause a deterioration in already vulnerable US-Russia relations.

The Trump administration confirmed that the State Department approved a commercial license for exporting a variety of sniper rifles and ammunition in the largest commercial sale of lethal defensive weapons to Ukraine since 2014. Ukraine also asked for antitank missiles, but the US side did not approve the request. The weapons are expected to strength the Ukrainian government.

State Department Spokeswoman Heather Nauert said the Russian Government had “unilaterally withdrawn” from the deconflict mechanism and ceasefires designed to allow safe passage to civilians. Nauert also called on Russia to put an end to attacks in eastern Ukraine.

Canada followed suit and decided to sell weapons to Ukraine. The arms sales were criticized by Russia. According to Tass, Pyotr Ilyichev, Russia’s first deputy permanent representative to the UN, said the US was pushing Ukraine’s leadership toward new military adventures.

It is reported that the Obama administration did not sell lethal weapons to Ukraine, trying to avoid irritating Russia. However, the action was actively supported by both high level national security officials in the White House and members of Congress. And President Donald Trump himself approved the plan based on suggestions by both the State Department and Pentagon. The Washington Post commented that arm sales to the Ukraine may “may complicate President Trump’s stated ambition to work with Russian President Vladimir Putin.”