HEADLINE US begins reducing troops in Iraq after victory over IS

US begins reducing troops in Iraq after victory over IS 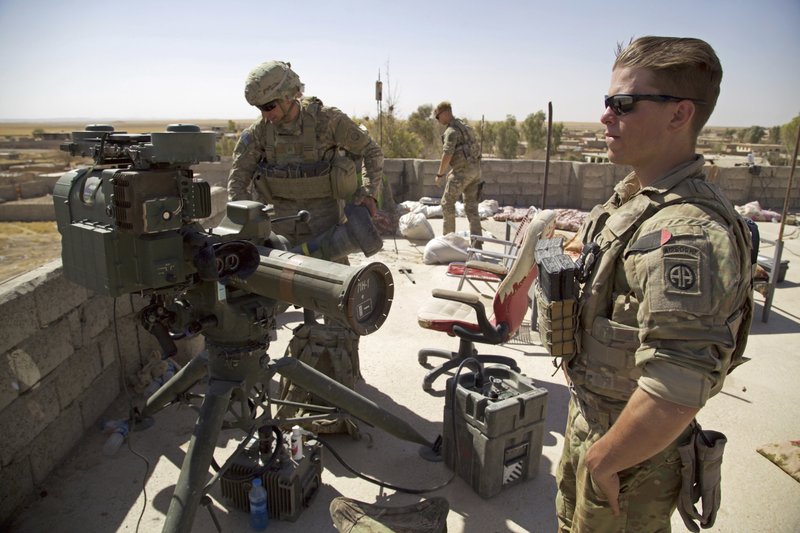 The US has started to reduce the number of its troops in Iraq following Baghdad’s declaration of victory over the Islamic State group last year, an Iraqi government spokesman and Western contractors said Monday.

The move marks a shift in priorities for the US following the collapse of the extremists’ so-called caliphate late last year. It also comes about three months ahead of Iraqi national elections in which paramilitary groups with close ties to Iran are set to play a decisive role.

Dozens of U.S. soldiers have been transported from Iraq to Afghanistan on daily flights in the past week, along with weapons and equipment, the contractors said.

An Associated Press reporter at the Al-Asad base in western Iraq saw troop movements reflecting the account by contractors. The contractors spoke on condition of anonymity in line with regulations and declined to reveal the exact size of the drawdown.

“The battle against Daesh has ended, and so the level of the American presence will be reduced,” said government spokesman Saad al-Hadithi, who used the Arabic language acronym for IS.

Al-Hadithi stressed that the drawdown — the first since the war against IS began more than three years ago — was still in its early stages and doesn’t mark the beginning of a complete pullout of US. forces.

“Continued coalition presence in Iraq will be conditions-based, proportional to the need and in coordination with the government of Iraq,” Army Col. Ryan Dillon, a coalition spokesman, told the AP.

One senior Iraqi official close to Prime Minister Haider al-Abadi said 60 percent of all U.S. troops still in Iraq will be withdrawn, according to the initial agreement reached with Washington. The plan would leave about 4,000 U.S. troops to continue training the Iraqi military. The official spoke on condition of anonymity because he was not authorized to talk to the media.

As of late September, there were 8,892 U.S. troops in Iraq, according to a Pentagon report released in November.

The U.S. first launched airstrikes against the Islamic State group in Iraq in August 2014. The intervention was described at the time as “limited,” but as Iraq’s military struggled to roll back the extremists, the coalition’s footprint in the country grew steadily.

“We’ve had a recent change of mission, and soon we’ll be supporting a different theater of operations in the coming month,” U.S. Army 1st Lt. William John Raymond told the AP at the Al-Asad base.

He spoke as he and a handful of soldiers from his unit conducted equipment inventory checks required before leaving Iraq. Raymond declined to specify where his unit was going because the information has not yet been made public.

In the lead up to the Iraqi elections slated for May, the indefinite presence of U.S. troops in the country continues to be a divisive issue.

Al-Abadi, who is seeking another term, has struggled to balance the often competing interests of Iran and the United States, both key allies who have backed him against IS.

While the U.S. has closely supported key Iraqi military victories over IS in places like the city of Mosul, some of the Shiite-led paramilitary forces with close ties to Iran have called for the withdrawal of U.S. forces. The prime minister has stated that Iraq’s military will need U.S. training for years to come.

“This is a message to those who doubt the government’s decisions regarding the presence of American (forces in Iraq): There are rules and the promise of a withdrawal,” al-Hadithi said.

Some in Iraq’s Sunni minority community view the U.S. presence in Iraq as a buffer against the country’s Shiite-dominated central government.

“The (drawdown) is an abdication of responsibility by the coalition,” said Fahad al-Rashed, a member of the provincial council in Anbar province, which has a Sunni majority. He said he recognized that the decision fell within the jurisdiction of the central government, but that local officials in Anbar would have asked the U.S. to reconsider.

Iraq declared victory over IS in December after more than three years of grueling combat against the extremists — fighting that largely took place with close U.S. support. In 2014, at the height of the Sunni militant group’s power, IS controlled nearly a third of Iraqi territory.

While the self-styled caliphate across parts of Iraq and Syria has crumbled and the militants no longer hold a contiguous stretch of territory, the group still poses a security risk in Iraq, according to Iraqi and U.S. officials.

Glynn pledged continued support for Iraq’s security forces but acknowledged that coalition “capabilities” in Iraq would likely shift now that conventional combat operations against the group have largely ended.

There were about 170,000 US troops in Iraq in 2007 at the height of the surge of U.S. forces to combat sectarian violence unleashed by the U.S.-led invasion to topple dictator Saddam Hussein. U.S. troop numbers eventually fell to 40,000 before the complete withdrawal in 2011.