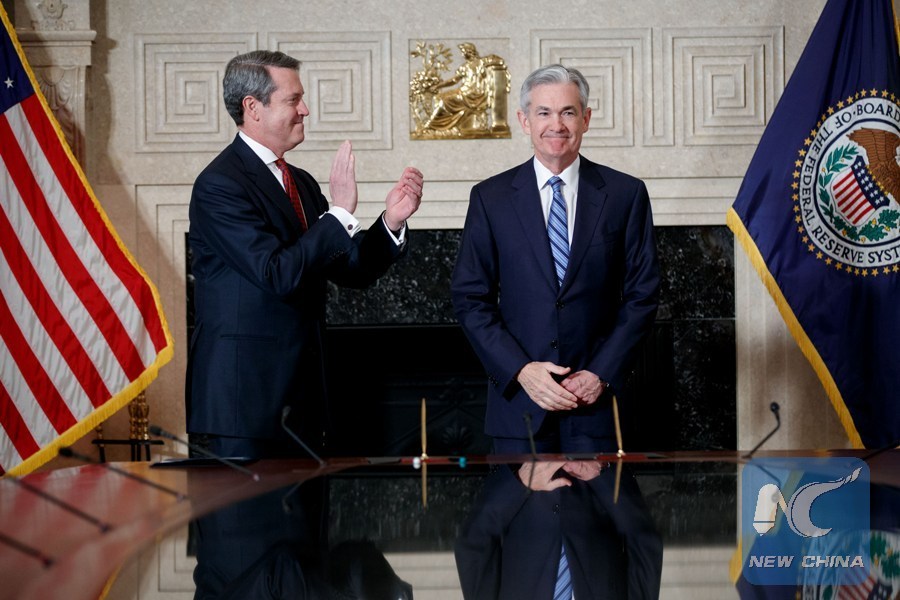 Jerome Hayden Powell, right, takes the oath of office as the 16th Chairman of the US Federal Reserve Board at the Federal Reserve, Feb. 5, 2018. (Xinhua/Ting Shen)

Federal Reserve Chairman Jerome Powell told US lawmakers on Monday that the central bank would stick with gradual interest rate increases despite the added stimulus of tax cuts and government spending.

Fed policymakers anticipate three rate increases this year, and Powell gave no indication in prepared remarks to the House Financial Services Committee that the pace needs to quicken even as the "tailwinds" of government stimulus and a stronger world economy propel the US recovery.

"The (Federal Open Market Committee) will continue to strike a balance between avoiding an overheating economy and bringing ... price inflation to 2 percent on a sustained basis," Powell said in his first monetary policy testimony to Congress as Fed chief.

"Some of the headwinds the U.S. economy faced in previous years have turned into tailwinds," Powell said, noting recent fiscal policy shifts and the global economic recovery. Still, "inflation remains below our 2 percent longer-run objective. In the (FOMC's) view, further gradual rate increases in the federal funds rate will best promote attainment of both of our objectives."

The testimony sent Powell's first signal as Fed chief that the massive tax overhaul and government spending plan launched by the Trump administration will not prompt any immediate shift to a faster pace of rate increases. "Gradual" has been the operative word since the Fed began raising rates under Powell's predecessor, Janet Yellen, in late 2015.

The Fed is expected to approve its first rate increase of 2018 at the next policy meeting in March, when it will also provide fresh economic projections and Powell will hold his first press conference.