HEADLINE US government workers home without pay as shutdown drags on

US government workers home without pay as shutdown drags on 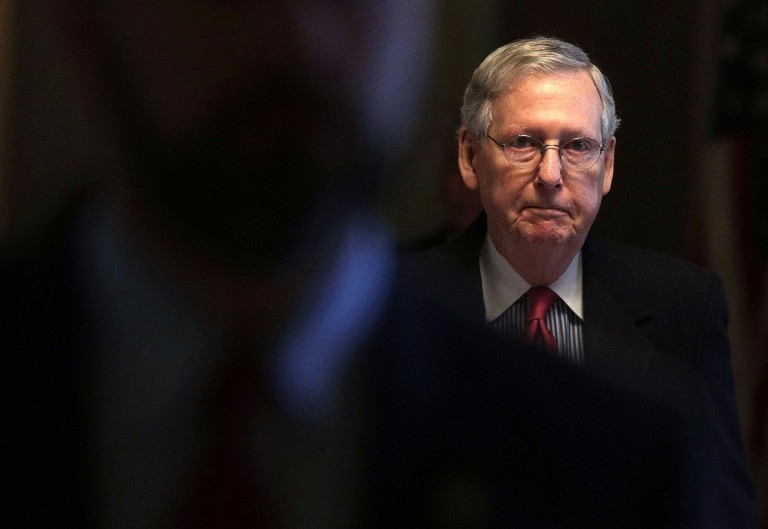 Hundreds of thousands of US federal employees were forced to stay home without pay Monday after lawmakers failed to reach an agreement on ending a government shutdown before the start of the work week.

Although leaders of President Donald Trump's Republican Party and opposition Democrats touted progress during weekend talks, they pushed back a scheduled late-night vote on a stopgap funding measure to Monday at noon (1700 GMT).

Trump goaded Democrats from the sidelines, accusing them of shutting down the government to win concessions on immigration, in service of "their far left base."

"They don't want to do it but are powerless," he tweeted, referring to Democratic leaders in Congress.

The impasse, the first of its kind since 2013, cast a huge shadow over the first anniversary of Trump's inauguration as president Saturday.

After special weekend sessions of Congress which saw bitter recriminations traded across the political aisle, Senate Majority Leader Mitch McConnell pledged late Sunday to address Democrat concerns over the Deferred Action on Child Arrivals (DACA) program that shields immigrants brought to the country as children from deportation, but expires on March 5.

The Senate's top Democrat Chuck Schumer responded by saying he was eager to continue talks on reopening the government but added that the parties were "yet to reach an agreement on a path forward."

Hopes that the shutdown, which began at midnight Friday, could be limited to the weekend were raised when a bipartisan group huddled for hours on Sunday trying to end the standoff, but they ultimately failed to reach a deal.

Democrat and Republican senators huddled separately ahead of Monday's crunch vote on advancing a measure that keeps government funded through February 8, as McConnell urged Democrats to end their blocking tactics and "put this mess behind us."

"Every day we spend arguing about keeping the lights on is another day we cannot spend negotiating DACA or defense spending or any of our other shared priorities," he said.

The bill requires 60 votes to advance in the 100-member Senate, meaning Republicans -- who have a one-seat majority -- would need to lure several Democrats to their side. There were no outward signs early Monday that many Democrats were prepared to break ranks.

"The president's focus is making sure we get the government reopened. It's outrageous that Democrats are holding our national security hostage," she told ABC's "Good Morning America" program.

Over the weekend, Trump encouraged the Senate's Republican leaders to invoke the "nuclear option" -- a procedural maneuver to change the chamber's rules to allow passage of a budget by a simple majority of 51 votes to end the shutdown.

But Senate leaders have been wary of such a move in the past, as it could come back to haunt them the next time Democrats hold a majority.

There have been four government shutdowns since 1990. In the last one, more than 800,000 government workers were put on temporary leave.

"We're just in a holding pattern. We just have to wait and see. It's scary," Noelle Joll, 50, a furloughed US government employee, told AFP in Washington.

In New York, meanwhile, Governor Andrew Cuomo said the state would pay for the reopening of the Statue of Liberty, the inspirational landmark that was among facilities closed under the shutdown.

Highlighting the deep political polarization, crowds estimated in the hundreds of thousands marched through major US cities over the weekend against the president and his policies and to express support for women's rights.

At the heart of the dispute is the issue of undocumented immigration.

Democrats have accused Republicans of poisoning chances of a deal and pandering to Trump's populist base by refusing to back a program that protects an estimated 700,000 "Dreamers" -- undocumented immigrants who arrived as children -- from deportation.

Democrats have refused to go along with the temporary federal funding request unless it addresses DACA in part because they fear Republican leaders will not act to protect the "Dreamers" before March when deportations are set to begin.

But in a signal to Democrats, McConnell committed on the Senate floor to addressing immigration in a timely fashion, saying that if the issues were not resolved by February 8, "it would be my intention to proceed to legislation that would address DACA, border security and related issues."