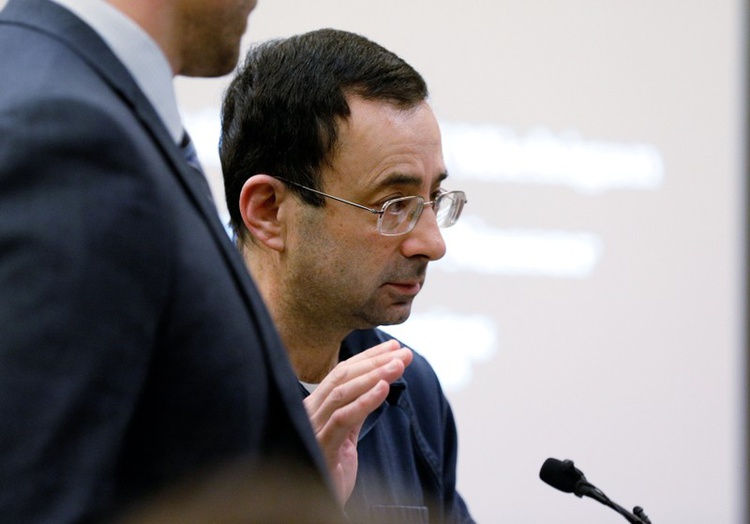 Dr. Larry Nassar, a former team USA Gymnastics doctor who pleaded guilty in November 2017 to sexual assault charges, raises his hand to be sworn in for his sentencing hearing in Lansing, Michigan, U.S., January 16, 2018. ( Photo: Reuters)

The U.S. House Energy and Commerce Committee said Thursday it had sent requests for information to the U.S. Olympic Committee and 48 national governing bodies of various sports and Michigan State University, expanding the committee’s investigation into sexual abuse within organized sports.

A Senate Commerce Committee panel sent a similar request last month as part of a separate investigation. Both committees sent initial letters in January and the House panel has said it plans to convene a hearing on the issue.

“Based on information received to date, the committee is concerned that a pervasive and systemic problem exists in Olympic sports. The safety and well-being of all athletes should be the highest priority of the U.S. Olympic Committee and each of the respective national governing bodies,” House Republican and Democratic committee leaders said in a joint statement. The letters seek answers by March 21.

Congressional committee staff have had briefings with Michigan State and others under investigation.

The USOC last month outlined reforms aimed at protecting its athletes from abuse.

The scandal prompted the entire board of directors at USA Gymnastics, the sport’s U.S. governing body, to resign, along with the president and athletic director of Michigan State University, where Nassar also worked. It also spawned lawsuits and criminal and civil investigations

Nassar pleaded guilty to molesting female athletes under the guise of medical treatment and was sentenced to life in prison.

Authorities say Nassar victimized more than 260 women and girls, including several Olympic gold medalists. Nearly 200 of them offered testimony during a pair of sentencing hearings in Michigan earlier this year.

Last month, Senators Jerry Moran, a Republican, and Richard Blumenthal, a Democrat, met with a number of former U.S. Olympic athletes to talk about the abuse scandal.

“The young women’s stories we heard today reinforced our determination to root out abuse in youth sport governing bodies,” the pair said in a joint statement.