The US House passed legislation by voice vote Tuesday to overhaul sexual harassment policies on Capitol Hill amid the ongoing "Me Too" social media movement and revelations that multiple lawmakers had engaged in misconduct.

The bill, which now goes to the Senate, seeks to streamline the process available to Congress staffers to report harassment, provide additional resources for people filing complaints and establish transparency requirements for taxpayer-funded settlements to resolve cases, according to The Hill news report.

Under the bill, any lawmaker who agrees to a settlement on sexual harassment would have to reimburse taxpayers within 90 days and would be barred from using any office funds to pay the costs.

The Office of Compliance, which handles the workplace dispute reporting process, would be required to publish reports online every six months detailing the settlement amounts and the offices involved.

"Thanks to the 'Me Too' movement, the American public has made it clear that they have had enough. They expect Congress to lead and for once, we are," said Democratic lawmaker Jackie Speier, an author of the bill.

In the past 20 years, nearly 200,000 US dollars have been provided by a special fund managed by the Treasury Department to cover settlements related to sexual harassment on Capitol Hill, data from the House Administration Committee show.

"Me Too," a two-word hashtag that originated in the United States, is used on social media to help demonstrate the prevalence of sexual assault and harassment, especially in the workplace.

The House also adopted a resolution that requires each employing office in the lower chamber to adopt anti-harassment and anti-discrimination policies, which will go into effect immediately without needing action by the Senate, said The Hill report. 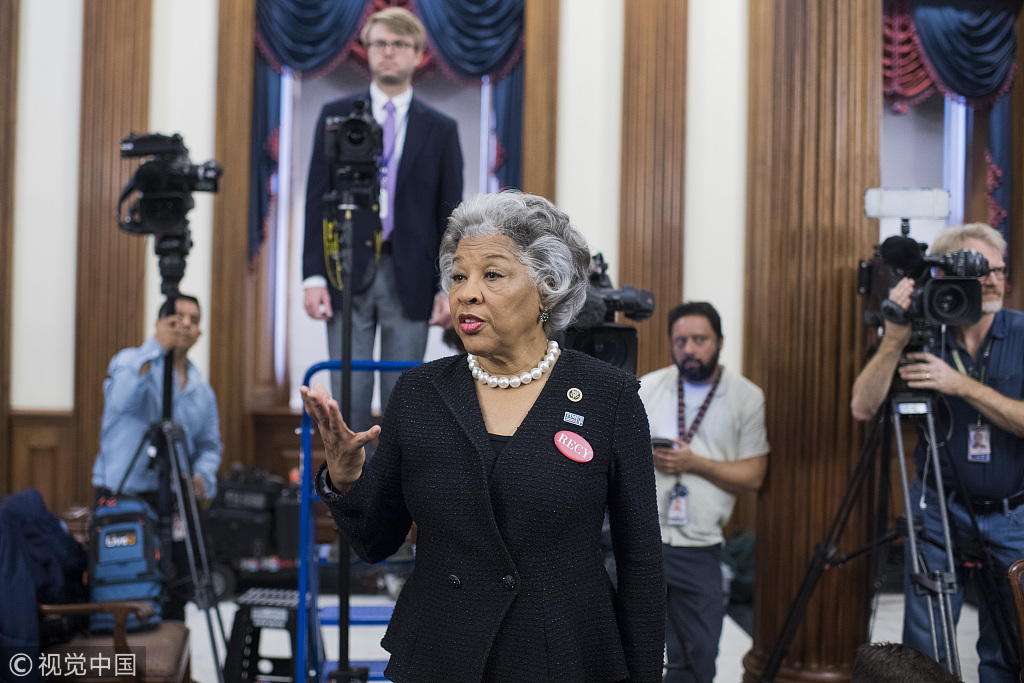 Photo taken on  January 30, 2018 shows Rep. Joyce Beatty, D-Ohio wearing black during a photo op in the Capitol's Rayburn Room to show solidarity with men and women who are speaking out against sexual harassment and discrimination. (VCG Photo)