HEADLINE US jobless claims back off 48-year low; layoffs declining

US jobless claims back off 48-year low; layoffs declining 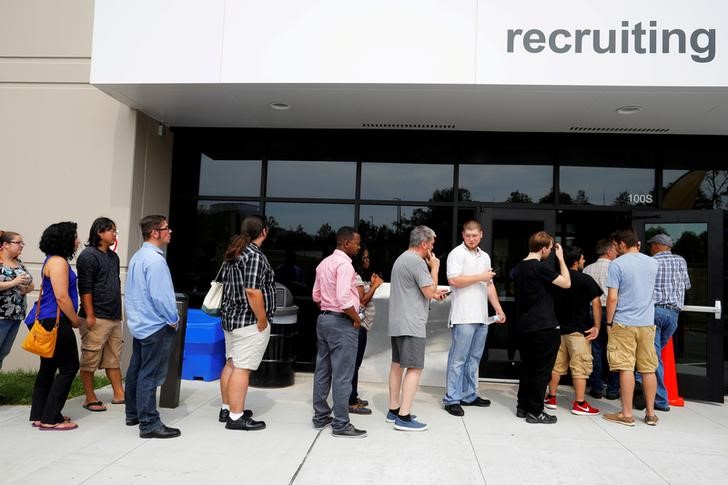 The number of Americans filing for unemployment benefits rebounded last week from a more than 48-year low, but the trend continued to point to robust labor market conditions.

That was underscored by other data on Thursday showing job cuts announced by U.S.-based employers fell 20 percent in February. Federal Reserve officials consider the labor market to be near or a little beyond full employment. The tight jobs market is seen boosting wage growth and spurring inflation.

“The well looks increasingly dry to many companies seeking skilled workers, and time will tell whether the lack of labor will slow the overall economy in future months,” said Chris Rupkey, chief economist at MUFG in New York.

Initial claims for state unemployment benefits increased by 21,000 to a seasonally adjusted 231,000 for the week ended March 3, the Labor Department said. Claims dropped to 210,000 in the prior week, which was the lowest level since December 1969.

Economists polled by Reuters had forecast claims rising to 220,000 in the latest week. It was the 157th straight week that claims remained below the 300,000 threshold, which is associated with a strong labor market. That is the longest such stretch since 1970, when the labor market was much smaller.

The claims data has no impact on February’s employment report, which is scheduled for release on Friday, as it falls outside the survey period. Claims mostly declined in February, leading economists to expect another month of strong job growth.

According to a Reuters survey of economists, the Labor Department’s closely followed employment report will likely show that nonfarm payrolls increased by 200,000 jobs last month, matching January’s gains. The unemployment rate is forecast falling one-tenth of a percentage point to 4.0 percent, which would be the lowest level since December 2000.

So far this year, employers have announced 80,022 layoffs, the lowest number of planned job cuts between January and February since 1995. Planned layoffs have been below 50,000 a month for the last 22 months, the longest streak since the company started tracking the series.

The dollar firmed against a basket of currencies. European Central Bank President Mario Draghi said monetary policy would remain “reactive” and that measures of underlying inflation were still subdued.

Trump’s plan to impose a 25 percent tariff on steel imports and 10 percent on aluminum to protect domestic producers against competition has sparked wide condemnation and stoked fears of a trade war.

“However, with automation dominating those industries, the tariffs will more likely cause companies that manufacture using those products, such as automotive and aerospace, to cut jobs.”

The Labor Department report showed the four-week moving average of initial claims, viewed as a better measure of labor market trends because it irons out week-to-week volatility, rose 2,000 to 222,500 last week.

It also showed the number of people receiving benefits after an initial week of aid decreased 64,000 to 1.87 million in the week ended Feb. 24. The four-week moving average of so-called continuing claims fell 14,250 to 1.91 million.