HEADLINE US makes excuses for beefing up its own nuclear arsenal: FM spokesperson

US makes excuses for beefing up its own nuclear arsenal: FM spokesperson 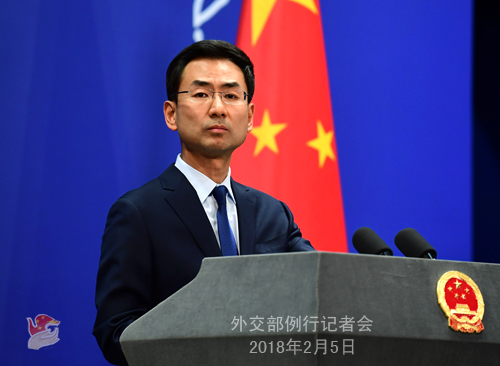 China firmly opposes the Nuclear Posture Review published by the US Department of Defense, a spokesperson from China’s Foreign Ministry said on Monday.

The review, aligned with the National Defense Strategy and the National Security Strategy, sticks to an outdated “cold-war mentality” and concepts such as a “zero-sum game.”It exaggerates geopolitical issues and competition among major powers, overstating the role of nuclear weapons in security policies. It also ignores the international community’s call for nuclear disarmament, and deviates from our era’s theme of peace and development, Foreign Ministry spokesperson Geng Shuang said at a press conference.

The US owns the largest and most advanced nuclear arsenal in the world. However, it still invests heavily in building its nuclear forces. Such a posture will aggravate the global strategic imbalance, Geng said.

Giving up the goal of a nuclear weapon-free world will undermine the international nuclear disarmament process, Geng warned.

China is actively building a community of human destiny, which advocates the establishment of a common, integrated, cooperative and sustainable new security concept. China will pursue the nuclear strategy of self-defense, he added.

China’s nuclear weapons policy has never been changed in the half a century since the country mastered nuclear technology. The US attempts to make excuses for its own expansion and beefing up of its nuclear arsenal by distorting China’s policy and practices is obviously in vain, Geng pointed out.

“We hope US will abandon the 'cold-war mentality' and the concept of a zero-sum game and stop looking at the relations between major powers through a lens of confrontation. We hope the US will conform to the trend of our times of peace and development, earnestly assume responsibilities for nuclear disarmament, and continue to substantially reduce its nuclear arsenals in a complete, verifiable and irreversible manner, and reduce the role of nuclear weapons in US national security strategy and safeguard international peace and stability with effective actions,”Geng stressed.