US opens Jerusalem embassy on conflict's bloodiest day in years 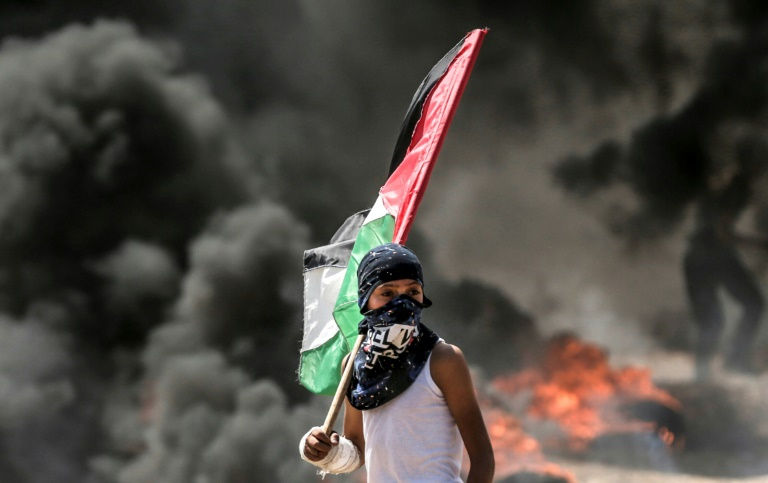 A Palestinian boy holds his national flag during clashes between protesters and Israeli forces near the Gaza border on May 14, 2018 (Photo: AFP)

The United States opened its deeply controversial embassy in Jerusalem on Monday but the inauguration was marred by violent clashes along the Gaza border that left 43 Palestinians dead from Israeli fire in the conflict's bloodiest day in years.

The clashes, which left hundreds of Palestinians wounded, erupted before a White House delegation and Israeli officials opened the embassy at an inauguration ceremony in Jerusalem and continued throughout the day.

It was the bloodiest day in the Israeli-Palestinian conflict since a 2014 Gaza war.

The dead included a 14-year-old, according to the Gazan health ministry, which also provided the overall death toll. 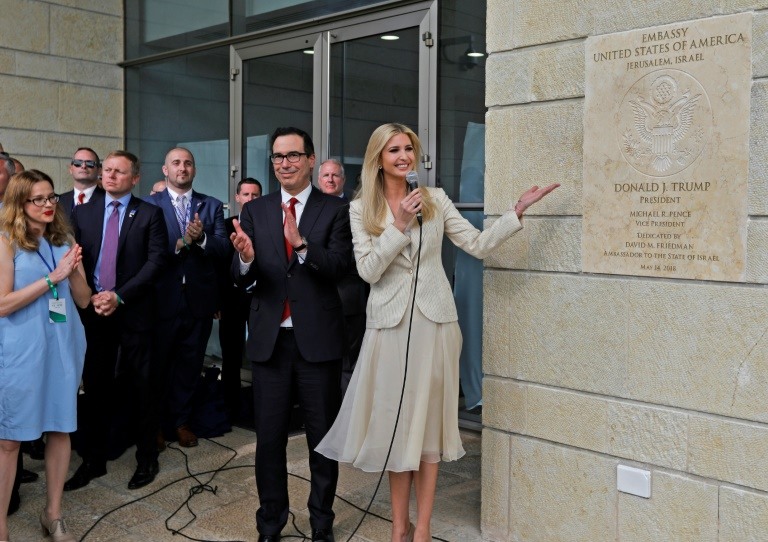 US Treasury Secretary Steven Mnuchin claps as Ivanka Trump unveils a plaque during the opening of the US embassy in Jerusalem on May 14, 2018 (Photo: AFP)

Tens of thousands had gathered near the border in protest while smaller numbers of stone-throwing Palestinians approached the fence and sought to break through, with Israeli snipers positioned on the other side.

The embassy inauguration nonetheless went on as planned, attended by a Washington delegation that included US President Donald Trump's daughter Ivanka and her husband Jared Kushner, both White House aides.

Ivanka Trump helped declare the new embassy open and a plaque and seal were unveiled before the 800 guests at the ceremony.

Trump addressed the ceremony by video.

"Our greatest hope is for peace," he said despite the Palestinian anger the move has provoked.

Israeli Prime Minister Benjamin Netanyahu told Trump in his address that "by recognising history you have made history."

He added later: "We are in Jerusalem and we are here to stay."

Along the Gaza border, crowds built throughout the day in the Palestinian enclave less than 100 kilometres (60 miles) away from Jerusalem and sealed off from Israel by a blockade. 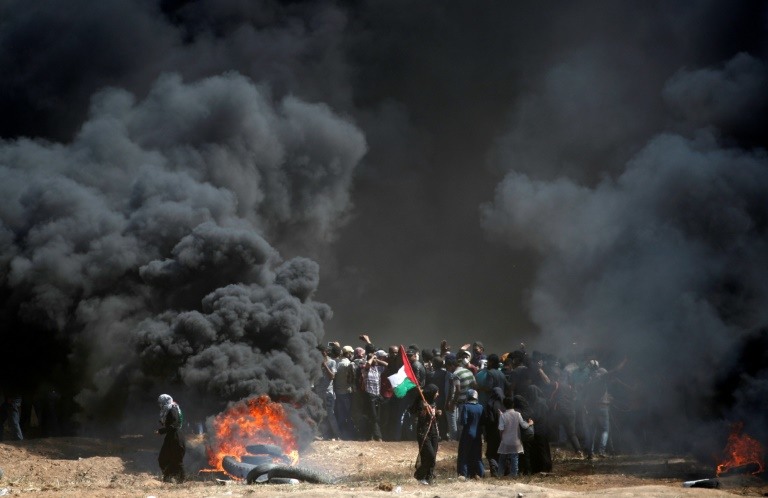 Palestinians protest during clashes with Israeli forces near the Gaza border on May 14, 2018 (Photo: AFP)

Israel's military said in the late afternoon that "40,000 Palestinians are currently partaking in violent riots in 13 locations along the Gaza Strip security fence."

"The rioters are hurling firebombs and explosive devices at the security fence and at (Israeli) troops and are burning tyres, throwing rocks and launching flaming objects with the intention of igniting fires in Israeli territory and harming (Israeli) troops."

It said soldiers were responding with "riot dispersal means and fire."

The military also said one of its fighter jets had struck five targets at a Hamas training facility in Gaza.

Earlier, a military plane and tank targeted two other Hamas posts in response to what it said was fire toward its forces by Hamas.

The Palestinian Authority government based in the occupied West Bank accused Israel of committing a "terrible massacre."

In a tweet on Monday, Trump said: "Big day for Israel. Congratulations!"

The ceremony took place at what until now had been a US consulate building in Jerusalem. 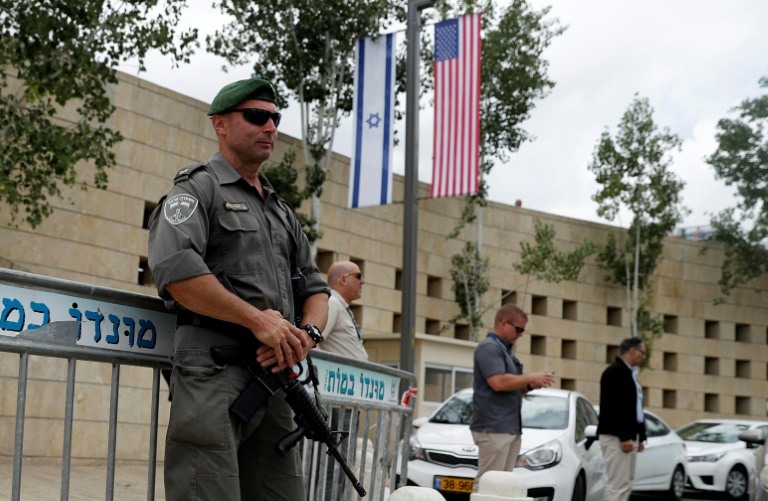 Israeli security forces stand guard outside the US consulate in Jerusalem, which will host Washington's new US embassy, on May 13, 2018 (Photo: AFP)

Around 1,000 police officers were positioned around the embassy, while Israel's army said it almost doubled the number of troops surrounding Gaza and in the occupied West Bank.

It also dropped leaflets warning Gazans to stay away from the fence, including one with a photo of the Champs-Elysees boulevard in Paris and the caption: "Gaza 2025? The choice is in your hands."

Israeli Defence Minister Avigdor Lieberman said in a message to Gazans "we will protect our civilians with all our means and not enable the fence to be crossed."

Israelis began celebrating on Sunday, as tens of thousands marched in Jerusalem, some holding American flags, to mark Jerusalem Day.

The annual event is an Israeli celebration of the "reunification" of the city following the 1967 Six-Day War.

Beyond the disputed nature of Jerusalem, the date of the embassy move is also key.

May 14 marks the 70th anniversary of the founding of Israel.

The following day, Palestinians mark the "Nakba", or catastrophe, commemorating the more than 700,000 Palestinians who fled or were expelled from their homes in the 1948 war surrounding Israel's creation.

There had already been weeks of protests and clashes along the Gaza border, with 97 Palestinians killed by Israeli fire there since March 30.

No Israelis have been wounded and the military has faced criticism over the use of live fire.

Israel says it only opens fire when necessary to stop infiltrations, attacks and damage to the border fence, while accusing Hamas, the Islamist movement that runs the blockaded Gaza Strip, of seeking to use the protests as cover to carry out violence.

Jerusalem's status is perhaps the thorniest issue in the Israeli-Palestinian conflict.

Israel considers the entire city its capital, while the Palestinians see east Jerusalem as the capital of their future state.

In the decades since 1967, international consensus has been that the city's status must be negotiated between the two sides, but Trump broke with that to global outrage.

He has argued that it helps make peace possible by taking Jerusalem "off the table", but many have pointed out he has not announced any concessions in return from Israel.

Trump's initial decision led to a series of protests in various Middle Eastern and Muslim countries.