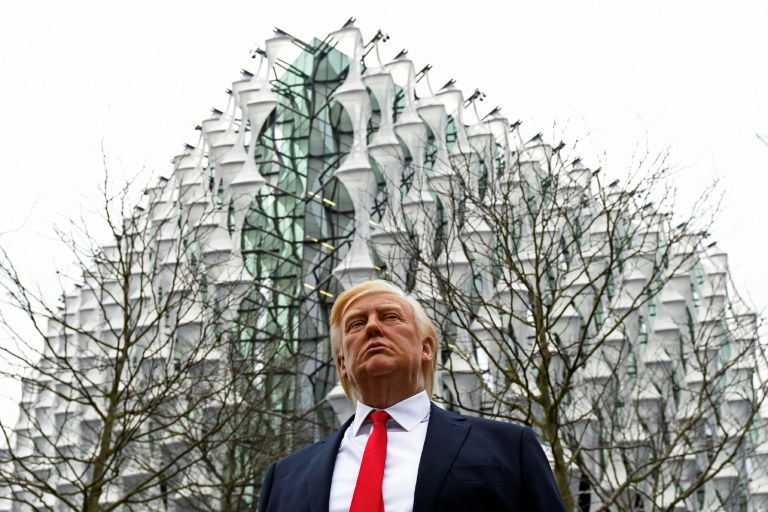 The new US embassy in London opened with little fanfare on Tuesday after US President Donald Trump refused to attend the inauguration because of its price tag and less-than-central location.

Embassy staff streamed past heavily-armed police and under a US flag flapping in the icy breeze as the new office opened for business.

But despite being 10 years in the making and with a price tag of around $1 billion (818 million euros), the opening was an uninspired affair after the US president was a no-show.

"I am not a big fan of the Obama administration having sold perhaps the best located and finest embassy in London for 'peanuts', only to build a new one in an off location for 1.2 billion dollars," Trump wrote last week.

The decision to move the embassy from the upmarket Mayfair district was made under former president George W. Bush, with security the top priority following the September 11, 2001, attacks and two 1998 US embassy bombings in Tanzania and Kenya.

The 12-storey new building in Nine Elms, south of the River Thames, comes complete with a half-moon shaped moat and appears like a futuristic fortress.

"It wouldn't be a design that I'd pick but I heard for safety it was meant to be really, really good," said Genevieve Storie, an Australian who has lived in the neighbourhood for four years.

Kevin Knowler, who grew up in the area, remarked the former embassy site at Grosvenor Square was "very compact" and "surrounded by lots of other places" which made the new location more suitable.

London Mayor Sadiq Khan, a vocal critic of Trump, tweeted after the US president announced his decision not to go to London: "Many Londoners have made it clear that Donald Trump is not welcome here while he is pursuing such a divisive agenda. It seems he's finally got that message."

Foreign Minister Boris Johnson, however, said on Monday that he expected Trump will visit "in due course", telling the Guardian newspaper that ties with Washington represented a "crucial relationship" for Britain.

The new embassy is surrounded by construction sites, testament to the vast Nine Elms redevelopment which has attracted other heavyweights such as publisher Penguin Random House which is due to move in at the end of next year.

Ravi Govindia, head of the area's Wandsworth Council, said he would expect Trump to be familiar with seeking out a business opportunity to move into an up-and-coming neighbourhood.

"Our relationship is with the workers, the people and government of the US which is bigger and greater than any single administration," he told AFP.

"Nine Elms is building at an unprecedented pace within a very short period of time," he said.

Standing outside the embassy, Knowler said he has seen a "massive change" since the neighbourhood was dominated by the docks.