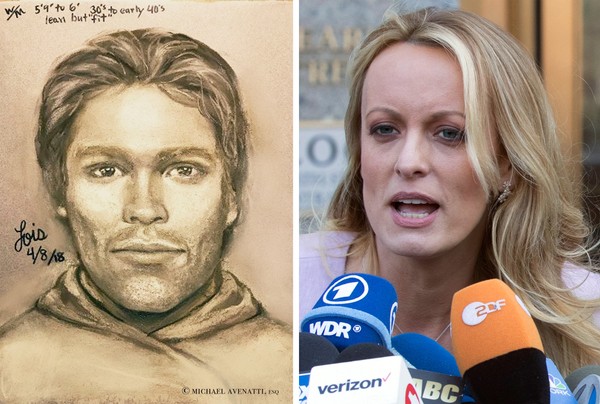 An artist's drawing, left, released by attorney Michael Avenatti shows a sketch of the man that adult film actress Stormy Daniels, right, says threatened her in a Las Vegas parking lot in 2011 to remain quiet about her affair with President Donald Trump.(The Associated Press)

U.S. adult movie star Stormy Daniels Tuesday released a sketch of the man whom she says threatened her in a parking lot to keep silent about her alleged sexual encounters with U.S. President Donald Trump seven years ago.

During Tuesday ABC's daytime talk show program The View, Daniels, whose real name is Stephanie Clifford, described details of her sexual relationship with U.S. President Donald Trump. The first encounter occurred in July 2006 when she was introduced to Trump at a celebrity golf tournament in Lake Tahoe, a famous vacation place located along the state line of California and Nevada.

Daniels said that as a 27-year-old woman at that time when Trump was 60, she was not physically attracted to him at all and did not want to have sex with him, but confirmed she was not a victim of any misconduct and "it was entirely consensual."

She said Trump did not use a condom and when she asked about his wife, Melania, who had given birth to a son just a few months before, Trump brushed the topic aside, saying "Oh yeah, yeah, you know, don't worry about that. We don't even - we have separate rooms and stuff."

Moreover, in the interview, Daniels pulled out a police sketch of the man who allegedly threatened to hurt her back in 2011 when she first attempted to share the story of her affair with Trump with a magazine for 15,000 U.S. dollars. She said the story was not published since Trump's attorney Michael Cohen threatened to sue the media outlet after he knew her move.

A few weeks later, Daniels said she was threatened by a man who approached her in Las Vegas.

"I was in a parking lot, going to a fitness class with my infant daughter ... and a guy walked up on me and said to me, 'Leave Trump alone. Forget the story.' And then he leaned around and looked at my daughter and said, 'That's a beautiful little girl. It'd be a shame if something happened to her mom.' And then he was gone," Daniels said.

Daniels' lawyer, Michael Avenatti, also announced on the program that a 100,000-dollar reward was being offered for the identification of the man.

Cohen, Trump's longtime personal lawyer, paid Daniels 130,000 dollars on the eve of the 2016 presidential election for what Daniels says was her silence about her encounters with Trump.

Daniels is now suing Trump to be released from a non-disclosure agreement because he never signed it.

Trump, through representatives, denied his relationship with Daniels. The president also said he was unaware of the payoff by Cohen at the time.

FBI agents raided Cohen's office and home in New York last week as part of a criminal probe and seized files related to the case.