US, ROK begin low-key military drill ahead of Kim-Moon summit 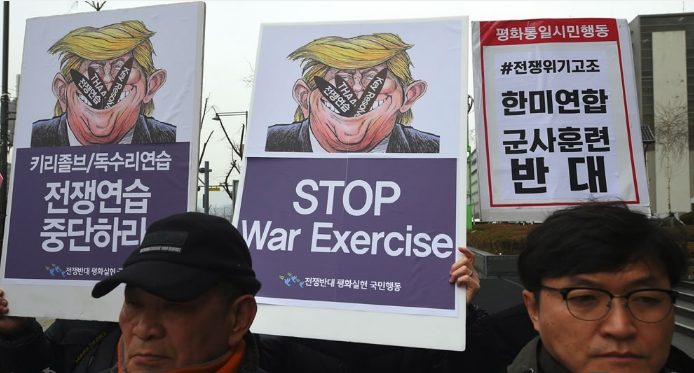 The computer-simulated, command-post drill comes after the start of the US-ROK Foal Eagle war game on April 1 and will run for two weeks. Both routine exercises were postponed by about a month due to the PyeongChang Winter Olympics and Paralympics in February and March.

With a thaw in tensions on the Korean Peninsula this year, Washington and Seoul have maintained a low-key stance in carrying out the drills; the DPRK, which has long denounced such military exercises as rehearsals for an invasion, has also refrained from harsh remarks. Earlier, Kim said he was "understanding" about the drills.

"We're not expecting a huge reaction from Pyongyang," said Jack Barton, CGTN's correspondent on the peninsula.

The US and ROK are trying to downplay the war games this year, he noted.

China has been urging the DPRK to halt its nuclear and missile activities in exchange for the suspension of large-scale US-ROK military exercises.

"China's suspension-for-suspension proposal has proven to be a right prescription for the problem," Chinese Foreign Minister Wang Yi said in March. "It has created the basic conditions needed for improving inter-Korea relations."

During a visit to China in late March, Kim called on Seoul and Washington to respond to Pyongyang's efforts with goodwill and take "progressive and synchronous measures" for the realization of peace.

He announced last Friday that the DPRK will stop nuclear tests and intercontinental ballistic missile launches starting from April 21.

Despite the easing of tensions, Teng Jianqun, a research fellow at the China Institute of International Studies, said the US and ROK are unlikely to cancel the drill during the Kim-Moon summit on Friday, because Washington is determined to maintain pressure on Pyongyang at the moment.

On Monday, officials from the DPRK and ROK gathered in the border village of Panmunjom to discuss the details of the upcoming summit between their leaders. Seoul also announced it has stopped propaganda broadcasts over the border.