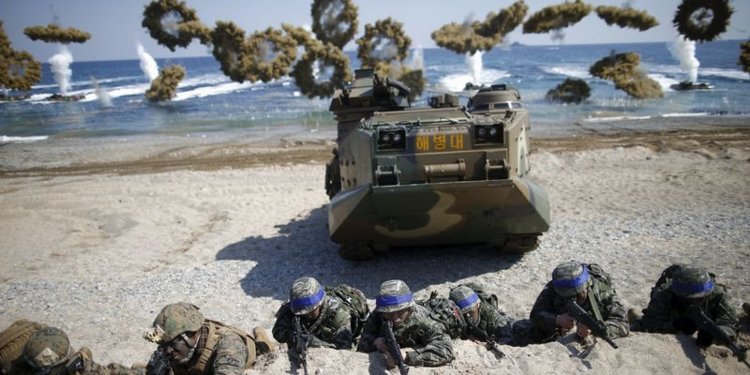 The United States and South Korea kicked off a low-key joint military drill Sunday as a diplomatic thaw over North Korea gathered pace.

Tension on the flashpoint peninsula have showed signs of easing in recent months after the isolated, nuclear-armed North proposed summits with the South and their "imperialist enemy" the US.

The drill -- which was delayed to avoid clashing with February's Winter Olympics in the South -- will be held for a month in April, about have the time it usually last.

This year's drills feature fewer strategic weapons like a nuclear-powered aircraft carrier, Seoul army said earlier. The deployment of such powerful weapons at past drills has frequently drawn an angry response from the North.

Pyongyang, which habitually slams the joint army drills between the South and the US as a rehearsal for invasion, has remained relatively quiet on the issue in recent weeks.

The Foal Eagle drill started the same day as a historic concert by South Korean pop stars in Pyongyang, which will be staged late Sunday as a peace gesture ahead of this month's inter-Korea summit.

Eleven South Korean acts -- including popular K-pop girlband Red Velvet -- are set perform in the North Korean capital -- the first such concert for more than a decade.

The flurry of reconciliatory moves comes after the Pyeongchang Winter Games, which the North used to mount a charm offensive, sending athletes, cheerleaders and even leader Kim Jong Un's powerful sister as a delegate.

Kim, who last week met with Chinese leader Xi Jinping in Beijing on his first overseas trip as leader, also met Olympics chief Thomas Bach in Pyongyang on Saturday, thanking him for helping to bring about a "dramatic thawing" of tensions on the peninsula.

Kim is set to hold a summit with South Korean President Moon Jae-in on April 27 at the border truce village of Panmunjom -- the third time ever that any leaders of the two rivals have met.