HEADLINE US says it seeks to reduce military tensions in peninsula

US says it seeks to reduce military tensions in peninsula 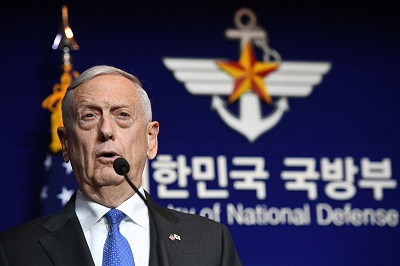 Washington's goal "is not war" as it seeks to ease high military tensions with Pyongyang, US Secretary of Defense Jim Mattis said Friday while visiting the Demilitarized Zone (DMZ) between the South and North Korea.

The situation on the Korean Peninsula, which will be on top of the agenda of Trump's upcoming visit in Asia, remains unclear despite some weak signals of relaxation, experts said.

"As Secretary of State Tillerson has made clear, our goal is not war but rather the complete, verifiable and irreversible denuclearization of the Korean Peninsula," Mattis said in a brief statement at the truce village of Panmunjom inside the DMZ, the 4-kilometer wide strip of land separating the two Koreas, Yonhap news reported on Friday.

Mattis also urged North Korea to halt provocations that threaten others "with catastrophe."

South Korean Defense Minister Song Young-moo said next to Mattis that the North's nuke and ballistic missiles are "weapons that can't be used," and "if it does, it will face retaliation by the strong combined force of South Korea and the US," Yonhap news reported.

The minister also called on Pyongyang to return to inter-Korean dialogue as early as possible.

"It is a regular DMZ visit for the US Defense Secretary and Mattis' visit here is necessary amid speculations on whether US President Donald Trump will visit the region," Da Wei, director of the Institute of American Studies at the China Institute of Contemporary International Relations, told the Global Times on Friday.

Trump is set to visit South Korea on November 7 and 8, the Xinhua News Agency reported.

Trump's visit may aim to pressure China to do more on solving the North Korean nuclear issue and it will also reassure Japan and South Korea, Da said.

"The situation on the Korean Peninsula remains unclear as the North has entered the final period on national defense after 17 missile tests and one nuclear test this year and it may continue its nuclear tests. And the US has failed to respond to China's 'dual suspension' proposal," Han Xiandong, an expert on Korean Peninsula issues at China University of Political Science and Law, told the Global Times on Friday.

However, the US will deploy three aircraft carrier groups near the Korean Peninsula and East China Sea for joint exercises with South Korea, which may provoke North Korea, Han said.

Tensions have flared on the Korean Peninsula after the US and North Korea traded threats of war and personal insults in recent weeks.

North Korea carried out its sixth nuclear test in September and has launched several missiles in recent months potentially capable of reaching the US mainland. The moves have resulted in the toughest UN sanctions.

Pyongyang reacted angrily to the new sanctions and Trump's recent remarks that "only one thing will work" with the North fueled concerns of a potential conflict, AFP reported.

However, despite the strained situation on the peninsula, North Korea said on Friday that it would return a South Korean fishing boat which had crossed the sea border. This was described as "a rare humanitarian gesture at a time of heightened tensions," AFP reported.

The ship, captured on October 21 after "illegally" crossing the border off the east coast, would be returned Friday evening "from the humanitarian point of view," North Korea's state-run news agency KCNA said.

Mattis is set to hold annual defence talks with Song on Saturday during the two-day trip, AFP reported.