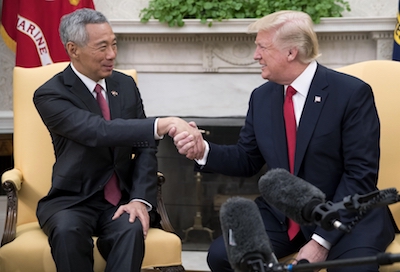 US President Donald Trump welcomes Prime Minister Lee Hsien Loong of Singapore to the Oval Office before a series of meetings between the two at the White House in Washington. (Photo: VCG)

WASHINGTON -- The United States and Singapore have pledged to continue strengthening cooperation on economy, defense and counter-terrorism, according to a joint statement released by the White House on October 24.

The statement followed the meeting of US President Donald Trump and visiting Singaporean Prime Minister Lee Hsien Loong on Monday.

The two leaders supported expanding economic ties through closer cooperation on bilateral tax issues, according to the statement.

The United States and Singapore were expected to sign a tax information exchange agreement and a reciprocal intergovernmental agreement by the end of the year.

Trump and Lee also noted the important role the bilateral Free Trade Agreement (FTA) has played in strengthening the economic relations between the two countries.

The US-Singapore trade has almost doubled from pre-FTA levels to reach more than $68 billion in 2016, with a consistent trade surplus for the US, said the joint statement.

The leaders also highlighted the strong commercial relationship between the two countries.

On Monday, Trump and Lee witnessed the signing of an agreement between Singapore Airlines (SIA) and Boeing for SIA to purchase 39 Boeing aircraft worth $13.8 billion.

In their meeting, Trump and Lee affirmed their close and long-standing defense ties as a cornerstone of bilateral relations and pledged to strengthen cooperation to counter the threat of the Islamic States militant group.

Lee is on a six-day visit to the United States starting from Saturday.