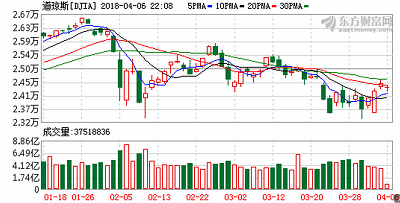 Wall Street stocks dropped early Friday as the latest barbs between the US and China worsened trade war fears and US jobs growth disappointed in March.

Trade war anxieties were back on the front burner after President Donald Trump threatened late Thursday to impose tariffs on an additional $100 billion in Chinese goods, provoking strong criticism from Beijing.

The Trump administration has sent mixed signals on trade, with threats of new sanctions accompanied by reassurances from some White House officials that the proposed tariffs are meant as a bargaining chip to a compromise.

"Over the last 72 hours, the war of words between the US and China has escalated rapidly," said a note from Oxford Economics that predicted the conflict could either be de-escalated gradually or lead to a "slippery slope towards a grade war."

"The recent Cabinet re-shuffle indicates a circle of presidential advisors who closely adhere to Trump's world view, raising the risks of an all-out trade war," the note added.

The latest war of words came as the Labor Department reported that the US added only 103,000 net new positions last month, well below expectations. Unemployment held steady at 4.1 percent.