HEADLINE US students to walk out nationwide protesting gun violence

US students to walk out nationwide protesting gun violence 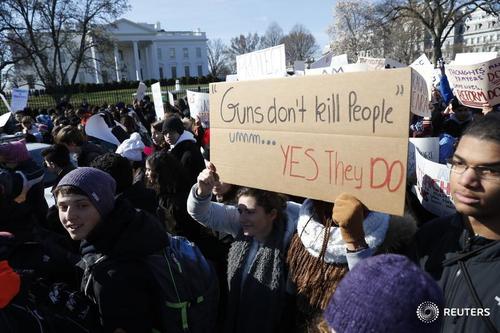 Students gather outside the White House in Washington as they join thousands of students across the country walking out of classes to demand stricter gun laws, March 14, 2018. (Photo: Reuters)

From Maine to Hawaii, students planned to walk out of school Wednesday to protest gun violence in the biggest demonstration yet of the student activism that has emerged in response to last month’s massacre of 17 people at Florida’s Marjory Stoneman Douglas High School.

In nearly 3,000 protests nationwide, students from the elementary to college level are taking up the call in a variety of ways. Some planned roadside rallies to honor shooting victims and protest violence. Others were to hold demonstrations in school gyms or on football fields. In Massachusetts and Georgia and Ohio, students said they’ll head to the statehouse to lobby for new gun regulations.

The coordinated walkouts were loosely organized by Empower, the youth wing of the Women’s March, which brought thousands to Washington, D.C., last year. The group urged students to leave class at 10 a.m. local time for 17 minutes — one minute for each victim in the Florida shooting -- and suggested demands for lawmakers, including an assault weapons ban and mandatory background checks for all gun sales.

This nationwide action is one of several protests planned for coming weeks. The March for Our Lives rally for school safety is expected to draw hundreds of thousands to the nation’s capital on March 24, its organizers said. And another round of school walkouts is planned for April 20, the 19th anniversary of the Columbine High School shooting in Colorado.