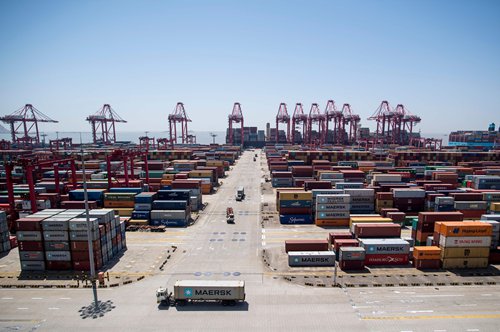 The US' unilateralist and protectionist moves to propose steep tariffs on Chinese imports expose the superpower's lack of confidence in a more globalized world, especially when facing China's growing international role, said analysts.

The world's two largest economies are developing in different directions, experts said, with China becoming more open and pursuing fairness, and the US becoming more self-preserving and anti-globalization.

Despite domestic and overseas opposition, the Trump administration has threatened to slap additional duties on Chinese goods worth $100 billion, after already proposing steep tariffs on Chinese imports worth $50 billion.

The US unilaterally proposed steep tariffs on Chinese goods to undermine a rules-based multilateral trade regime, which has been crucial for global growth, said Nobel Prize-winning American economist Joseph Stiglitz.

The US' unilateral approach will be a step backward for globalization and will cause unbearable outcomes, said former Chinese Commerce Minister Chen Deming at the just-concluded annual Boao Forum for Asia (BFA) in South China's Hainan Province.

The US' willful moves to propose steep tariffs on Chinese imports will have a negative impact not just on China and the US, but also on the global economy, analysts believe.

Kiyoyuki Seguchi, research director of the Canon Institute for Global Strategy Studies, said in a written interview that in the short term, protectionism could have some positive effects on the US' domestic industries and bring some benefits, such as a rise in employment.

In the medium and long term, however, protectionism will weaken the US' competitiveness and have negative effects on its consumers and enterprises, he wrote.

Martin Wansleben, chief executive of the Association of German Chambers of Commerce and Industry, said the Trump administration's disregard for international rules and regulations against the backdrop of a closely interconnected global economy will lead to no winners, adding that Germany and the rest of the EU will eventually become affected.

Francis Gurry, director-general of the World Intellectual Property Organization, said that "technology and production are all globalized" and "the global value chain will be affected by even a dispute between two parties as many other parties are also involved in the chain."

China hit back at the US' unilateral moves by rolling out its retaliatory tariff plan.The Trump administration then proposed a 25 percent tariff on 1,300 Chinese industrial and other products. In response, China released a list of similar proposed duties on US imports worth $50 billion.

"China was forced to take action and fight back. There's no way China will back off," said Ruan Zongze, executive vice president and senior research fellow at the China Institute of International Studies.

"China has to defend its legitimate interests as well as the global multilateral trade regime," Ruan said.

Oxford Economics, a leader in global forecasting and quantitative analysis based in Oxford, Britain, believes that China's reaction is a kind of tactic aiming only to encourage Washington to start talks to reduce the risk of a full-blown trade war.

Andras Inotai, research professor at the Institute for World Economics of the Hungarian Academy of Science, described the US' tariff move as an "own-goal," saying a sound solution to any trade dispute should be filed at the WTO.

Lawrence Loh, director of the Centre for Governance, Institutions and Organizations at the Business School of the National University of Singapore, said: "The US may actually shoot itself in the foot and risk losing global economic leadership."

"Constructive dialogues should take place to iron out whatever issues that might be bothering either the US or China," he said.