US to fly B-1B bombers over Korea during joint drill 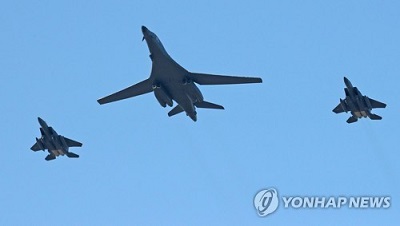 Seoul (People's Daily) – The US will deploy B-1B Lancer strategic bomber aircraft to Korean Peninsula on Wednesday during the largest-ever combined air force drill between the allies.

The long-range, multi-mission supersonic bombers based in Guam, plan to conduct bombing drills with South Korea's fighter jets, which is part of the combined air combat training.

The number of B-1Bs and the exact schedule of their sortie have not been specified yet. The US flew two B-1B bombers over the Korean Peninsula in early November, days ahead of President Donald Trump's visit to Asia.

The two countries kicked off the five-day Vigilant air combat exercise (ACE) on Monday, with two dozen F-22 and F-35 stealth fighters of the US and over 200 other warplanes of the two countries participating in the exercise.

"It's aimed at enhancing the all-weather, day and night combined air power operation capabilities of South Korea and the US," the Korean defense ministry said.

The allies will conduct the drills under various wartime scenarios, including simulated precision strikes on mock North Korean nuclear and missile targets.