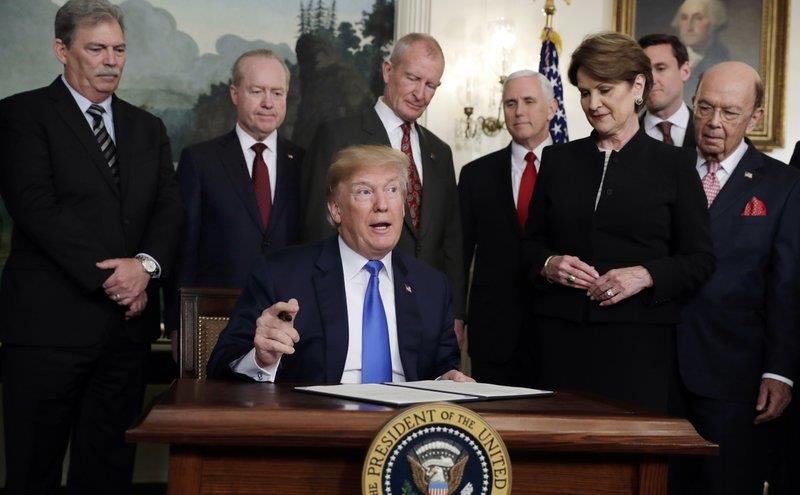 Washington (People's Daily) - US President Donald Trump signed a presidential memorandum on Thursday addressing tariffs on Chinese imports. In an exchange before the signing, the president said his administration is planning to levy tariffs on up to $60 billion worth of imports from China and impose investment restrictions on technology transfer and acquisitions by China.

In an earlier briefing, White House aides indicated US is planning to levy $50 billion in tariffs on imports from China. The reason for the discrepancy in the numbers remains unclear.

“This has been long in the making,” Trump said, adding that the tariffs could affect as much as $60 billion in goods.

This latest move by the White House is based on Section 301 investigation conducted by the US Trade Representative (USTR) Robert Lighthizer.

Additionally, as reported, the US intends to file a complaint against China with the World Trade Organization based on concerns over China’s intellectual property (IP). Trump maintained the institution has been disastrous to the US, and reiterated negotiations are still under way with China.
Earlier reports stated the Trump Administration plans to impose tariffs on more than 100 different goods imported from China. A full list is to be released in 15 days, affording businesses enough time to voice their concerns on the subject.

There is significant concern that the current move by the Trump Administration will escalate protectionism which will disadvantage the economies of not only US and China, but carry a spillover effect globally, also.

"Nobody can gain from a trade war. It will affect the daily life of American middle-class people, the balance sheet of American companies, and the indexes of the financial market," said Cui Tiankai, China’s ambassador to the US, Thursday morning.

The accusations against China on stealing American companies' intellectual property "are totally groundless" and "is a kind of discrimination," Cui said.

Previously, the spokeswoman of China’s Ministry of Foreign Affairs said, “China will not sit idly by and let its lawful rights and interests be undermined and will take all necessary measures.”