In just eight and a half hours, over 1,500 workers completed the installation of a new railway line as part of a train station upgrade in east China's Fujian Province.

Construction began at 6:30 p.m. Friday and by 3 a.m. Saturday, workers had completed the removal of old tracks, the laying of new tracks, and the installation of railroad switches at the station in the city of Longyan.

Seven trains and 23 excavators were used in the project.

The train station was upgraded to connect a newly-built line with three existing railway lines.

The newly-built line, linking Longyan with the city of Nanping in mountainous western Fujian, will begin operation at the end of 2018.

With a maximum designed speed of 200 kilometers per hour, the high-speed rail line will cut the travel time between the two cities from seven hours to just 90 minutes.

The 246 km Nanping-Longyan railway line will include stops in Shaxian, Sanming, Yong'an, and Zhangping.

Once operation begins, the new railway line will further integrate the less developed part of Fujian with the cities of Beijing, Shanghai and Guangdong. 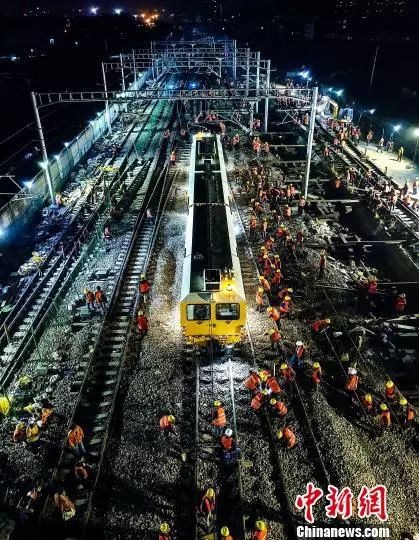