Tokyo (People's Daily) - An exhibition of ancient Chinese Nuo rite was held in Tokyo, Japan on Wednesday, one week ahead of the Spring Festival. The event attracted some 100 audiences joining the opening ceremony.

Nuo is an ancient Chinese rite originates in East China’s Jiangxi Province, honoring the nature, the tattoos, the ancestors, ghosts and gods.

Over 100 pieces of Nuo costumes were put on display at the Chinese Cultural Center in Tokyo. A Nuo troupe from Jiangxi invigorated the opening ceremony with a classic Nuo performance, featuring Chinese characters including ghost-buster Zhong Kui.

The Nuo rite – consisting of Nuo etiquette, Nuo theater, Nuo dance and Nuo customs – was listed as the first batch of Chinese intangible heritage in 2006.

It was deemed as the living fossil of Chinese ancient dance, tracing back to Han Dynasty (202 BC - 220 AD). 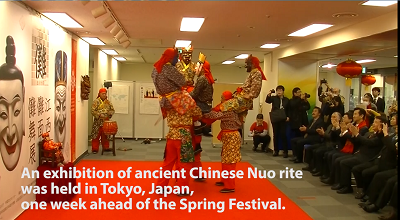