A new album, Second Farewell to Cambridge, was released at Cambridge University to further link its bond with Chinese poet Xu Zhimo.

The album contains 19 songs; two of them are performed in Mandarin Chinese – Second Farewell to Cambridge, originally a poem written by Chinese poet and King’s College alumni Xu Zhimo, and the Jasmine Flower, a Chinese folk song.

This is the first time in its 500-year history that the King’s College Choir has released and recorded songs in Chinese.

“To mark the college's very strong links with Xu Zhimo, it was a delight to make a setting of the Jasmine Flower Song, and to ask John Rutter, the English composer, to make the first classical setting of the words from Second Farewell to Cambridge,” said Stephen Cleobury, director of music at King’s College. 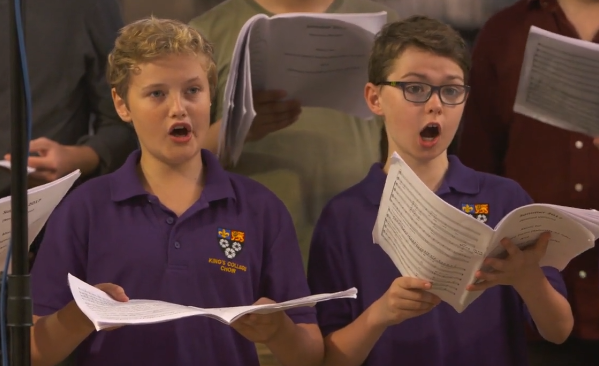 Benjamin Sheen, King's College's label and media manager said, "King’s is honored to have Xu Zhimo as an alumnus, and so it felt particularly appropriate to commission a new piece of music, a setting of his poem about his time at Cambridge, and to have our choir sing it for the first time. The Jasmine Flower Song has been received very warmly on the choir’s recent visits to China, and to be able to contribute a new arrangement of it is very special."

The track listing of this album has been carefully selected to best represent the near 100-year-old bond that King’s College shares with China. It also brings the sound of King’s Chapel to audiences worldwide, including never-before released mixes of music from Favorite Carols from King’s, that immerses listeners in the chapel’s legendary acoustics. Both the name of the album and its leading song, Second Farewell to Cambridge, originated from Xu and celebrates the legacy of his poem.

The young poet studied at King’s College from 1921-1922 and wrote this poem in 1928 when he revisited King’s. It paints an idyllic portrait of King’s, and it is now a compulsory text on Chinese literature syllabuses, learned by millions of schoolchildren across the country every year. It has also attracted numerous Chinese tourists to visit Cambridge, and in particular, King’s College.

While Second Farewell to Cambridge has already been adapted into many pop songs, this release marks its first mainstream classical interpretation, and a new arrangement by Rutter, an acclaimed English composer, opens this album. Elsewhere, the choir displays their impressively accurate Chinese pronunciation in Cleobury’s new arrangement of the 18th century folk song, Mo Li Hua (Jasmine Flower Song).

Moreover, the cover image of this album features a Chinese Jasmine flower painted by Yu Hui, a well-known Chinese painter from East China's Jiangsu province, who specializes in flowers and birds.

The choir is planning to host some events later this year to mark the new album, including an event during the annual Xu Zhimo Poetry and Art festival at King’s this summer.

While the festival takes place, King’s College will host a small opening ceremony to announce the establishment of the Xu Zhimo Friendship Garden, which will be the first Chinese garden at the University of Cambridge. In addition, the choir will be launching social media accounts on Chinese platforms at the same time as the CD release to communicate with Chinese audiences.

The album also will be available initially on Netease, BaiduMusic and Apple Music China, as well as on iTunes in Chinese-speaking territories outside of the Chinese mainland. 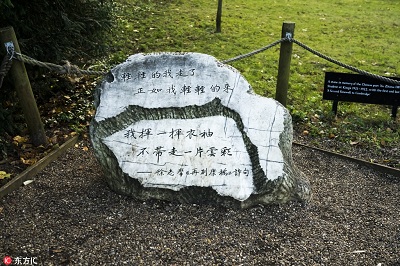 A monument engraved with quotation from Second Farewell to Cambridge by Chinese poet Xu Zhimo, Cambridge University's alumni in the 1920s, is seen in this undated photo.[Photo/IC]