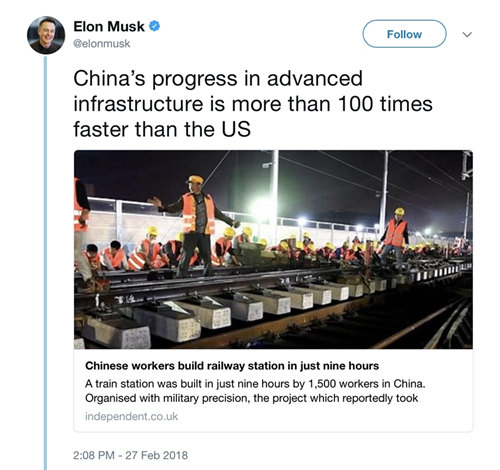 The tech tycoon, whose company SpaceX successfully launched the world's most powerful operational rocket into space earlier this month, made the comment while retweeting a post of the British online newspaper Independent on Twitter, which contains a short video depicting how some 1,500 Chinese workers managed to upgrade a railway station by installing a new railway junction in less than nine hours.

The construction, which took place in Longyan City of southeast China's Fujian Province, began on Jan. 19 at 6:30 p.m. local time and finished by 3:00 a.m. the following day. It was meant to connect a newly-built line with three existing railway lines. Seven trains and 23 excavators were used in the project.

Musk's tweet has been widely shared and gained over 1,300 comments so far, many of which echoing his view.

@EcoCrypto1 replied: "Absolutely amazing the teamwork that is put into this!", and

@brandonholma said: "I work for a light rail system in San Diego and we've been building 1 new station for over 6 months."

In following tweets, Musk went on pointing out the problems of inefficiency and high costs in some of the U.S. infrastructure projects, such as the elongation of the New York subway, saying the root cause, in his opinion, lies in "an exponential growth of bureaucracy" and "a self-serving private sector consultant industry" earning profits on project cost.

"The system of incentives is messed up," he added.

It is not the first time for people around the world to be amazed by the "China speed."

In 2015, a Chinese development company built a 57-story tower in 19 days in Changsha, Hunan Province. In June 2017, some 200 diggers demolished a major overpass in Nanchang, Jiangxi Province in just eight hours.

Both stories were widely reported by global media, with people around the world in awe of the speed as well as how well organized these jobs had been.