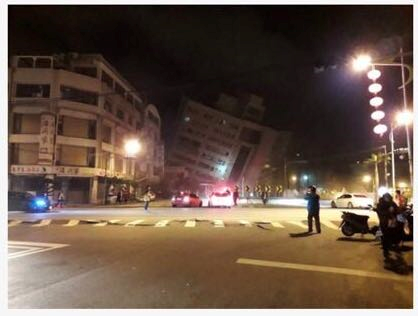 A 6.4-magnitude quake on the east coast of Taiwan has left four dead and 219 injured, the government said, after buildings crumbled and trapped people inside.

A hotel and an apartment block were the worst hit by the quake in the port city of Hualien, according to the national fire agency.

Five more buildings including a hospital have also been damaged with roads strewn with rubble, cracks along highways and damaged buildings tilted at angles.

The worst-hit Marshal Hotel partly crumpled into the ground, leaving it slanting on its side, as rescuers on cranes attempted to free people from its upper floors.

"It's the biggest quake I've experienced in Hualien in more than 10 years," resident Blue Hsu told AFP, who said his home shook violently.

Describing the scene at the hotel, Hsu said its bottom storeys had been crushed.

"The lower floors sunk into the ground and I saw panicked tourists being rescued from the hotel," he said.

Hualien is one of Taiwan's most popular tourist hubs as it lies on the picturesque east coast rail line and is near to popular Taroko Gorge.

Facebook user Sun Chen-hsiang, who was livestreaming the scene at the hotel from a distance, told how the building next to his home had also collapsed.

"All the people watching this livestream, please get yourself to a safe place and don't stay home," he said.

Another resident told AFP how an apartment block near his flat had also partially collapsed.

"I saw the first floor sink into the ground. Then it sunk and tilted further and the fourth floor became the first floor," said Lu Chih-son, 35, adding he saw 20 people rescued from the building.

"My family were unhurt, but a neighbour was injured in the head and is bleeding. We dare not go back home now. There are many aftershocks and we are worried the house is damaged."

There had been at least 15 aftershocks following the quake, Taiwan's weather bureau said.