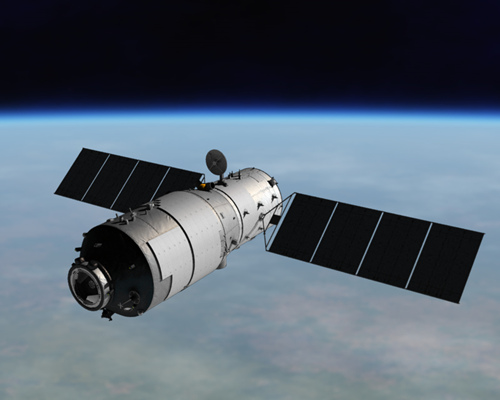 A conceptual photo of Tiangong-1 on its orbit. (File photo)

According to the CMSA announcement, Tiangong-1 stayed at an average altitude of about 167.6 kilometers. The most possible re-entry time would be 8:49 a.m., according to an announcement on the website of China Manned Space Engineering Office early Monday..

South Korea's National Space Situational Awareness Organization gave an estimated reentry time on its website Sunday, saying that the station is expected to reenter the atmosphere between 5:12 a.m. and 1:12 p.m. Seoul time (2012 GMT to 0412 GMT) on Monday.

The return of the Chinese space station has aroused global concerns and fear. However, there is no need to worry. The risk of any parts of Tiangong hitting a populated area is considered very low, the BBC reported on Saturday. Other media and space related corporations and institutes also say that the chances are slim. 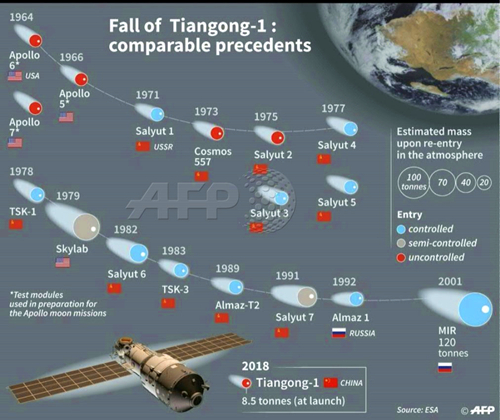 Previous plunges of space stations or modules comparable to that anticipated of the Chinese station Tiangong-1 in the near future. (Infographic: AFP)

Experts believe that the debris of the station will burn up during reentry, like any other space station. "The majority of the module can be expected to burn up during reentry heating, with the greatest probability being that any surviving fragments will fall into the sea," Richard Crowther, the UK Space Agency's chief engineer, told BBC News.

Tiangong-1 was launched on September 29, 2011, which completed China’s manned space program. The program started in 1992, prescribed as the "Three-step Strategy". The first step is to launch a manned spaceship, the second to launch a space lab and finally, to establish a space station.