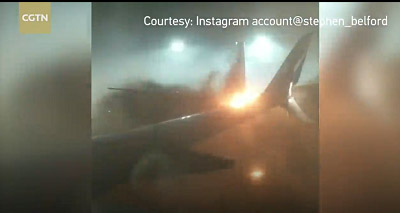 Two jets collided on the ground at a Toronto airport, setting the tail of one aircraft alight and forcing passengers to evacuate the other via an emergency slide. Both West Jet and Sunwing confirmed that their planes were involved in the collision at Toronto Pearson International, the second such incident at the airport in five months.