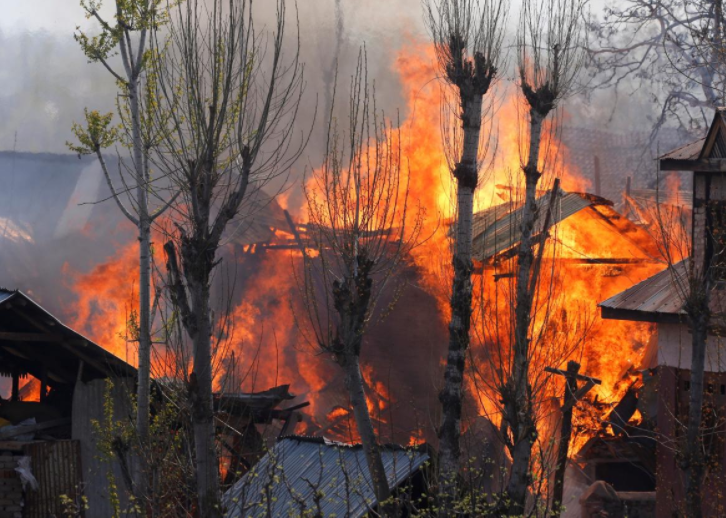 Flames and smoke billow from residential houses after they caught fire during a gunbattle between Indian army soldiers and suspected militants at Kachdoora village in south Kashmir's Shopian district April 1, 2018 (Photo: Reuters)

Indian security forces killed at least three civilians and wounded about 70 in restive Kashmir on Sunday when hundreds of people tried to prevent them from carrying out operations against suspected militants, police and residents said.

At least 17 other people, including 13 suspected militants, were killed in gunbattles during the day in southern Kashmir, police officials said, the worst violence in the region this year.

When hundreds of people came out on the streets of Kachdoora village in Shopian district to try to halt a gunbattle between militants and security forces, troops used tear gas and pellet guns to disperse the crowd. They later opened fire.

Local residents said that after the protests, the security forces called off the operation. Police said five militants and three soldiers were killed in the fighting.

Muslim separatists have been waging a violent campaign against Indian rule since the late 1980s in Indian-held Kashmir.

Fighting also broke out in two other villages in the region on Sunday.

S.P. Vaid, the state director general of police, said the army received information on Saturday night about militants hiding in an area near Dragad village, about 50 km (30 miles) south of Kashmir’s capital of Srinagar and also in Shopian district.

“In Dragad, 7 bodies of militants were recovered including top commanders. They were killed in a gunbattle,” Vaid said, adding that the owner of the house in which the militants were trapped was also killed.

Another militant was killed in Dialgam village in Anantnag district, about 60 km (37 miles) south of Srinagar, while one was caught alive, he said.

Authorities have directed schools and colleges in Kashmir to remain closed on Monday to prevent any recurrence of violence, and restrictions have been imposed in several areas.

Train services to south Kashmir have been suspended as a precautionary measure, a railways official said, and internet services in five districts have also been blocked.

In south Kashmir’s Pulwama district the local administration has imposed restrictions on the movement of people and vehicles to prevent any violence.