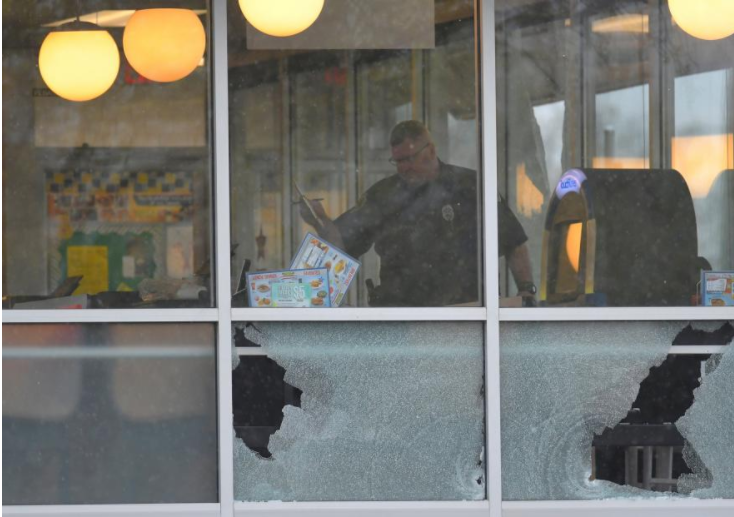 Metro Davidson County Police inspect the scene of a fatal shooting at a Waffle House restaurant near Nashville, Tennessee, US, April 22, 2018. (Photo: Reuters)

There have been no credible sightings of the 29-year-old suspect in the fatal shooting of four people at a Waffle House restaurant over the weekend, police said on Monday, as a manhunt pushed into its second day.

With the suspect still on the loose, Metro Nashville Police searched schools in the area near the restaurant in the Tennessee city’s Antioch neighborhood. Schools planned to open with extra security, police said, with a “lockout” barring all visitors in effect.

The suspected gunman, Travis Reinking, 29, originally from Tazewell County, Illinois, was last seen on Sunday morning wearing only black pants, police said. The suspect recently lived in an apartment not far from the 24-hour restaurant.

During the shootings, the suspect was wearing only a green jacket that he shed before leaving on foot, police said. That jacket contained two clips of ammunition for the assault-style rifle used in the shootings, police and school officials said.

The killings are the latest in a string of high-profile mass shootings in which a gunman used an AR-15 rifle. A nationwide debate on gun control has intensified since February, when a former student killed 17 people with an AR-15 at Marjory Stoneman Douglas High School in Parkland, Florida.

In Nashville, two people were shot dead outside the restaurant at about 3:30 a.m. (0730 GMT) on Sunday, and two were killed inside. The suspect fled after a 29-year-old diner, James Shaw Jr., wrestled the rifle from him. Police say Shaw probably saved several lives.

Shaw said he had retreated into a narrow hallway next to bathrooms at the Waffle House when the gunman entered the restaurant.

“I was just waiting for a chance, so when I saw the barrel down, I just saw my opportunity and I attacked,” Shaw told NBC-TV on Monday morning. He said he took the assault rifle from the suspect and threw it over a counter.

Shaw, who was grazed by a bullet during the attack, was praised by authorities for his courage, but on Sunday he denied he was a hero: “I just wanted to live,” he said.

Reinking was already known to authorities. He was arrested on the White House grounds by Secret Service officers in July 2017 and charged with unlawful entry after crossing a security barrier, the agency said in a statement.

Afterwards, authorities revoked Reinking’s Illinois authorization to have firearms and seized four guns, including the AR-15 used in the Waffle House shootings, Nashville police said. The guns were later returned to Reinking’s father, who has acknowledged giving them back to his son, police said.

By Monday, two of the four guns were unaccounted for. One was recovered during a search of Reinking’s apartment, police said.

Two wounded patrons were being treated at Vanderbilt University Medical Center, both listed in stable condition early on Monday. Others were cut by shattered glass.