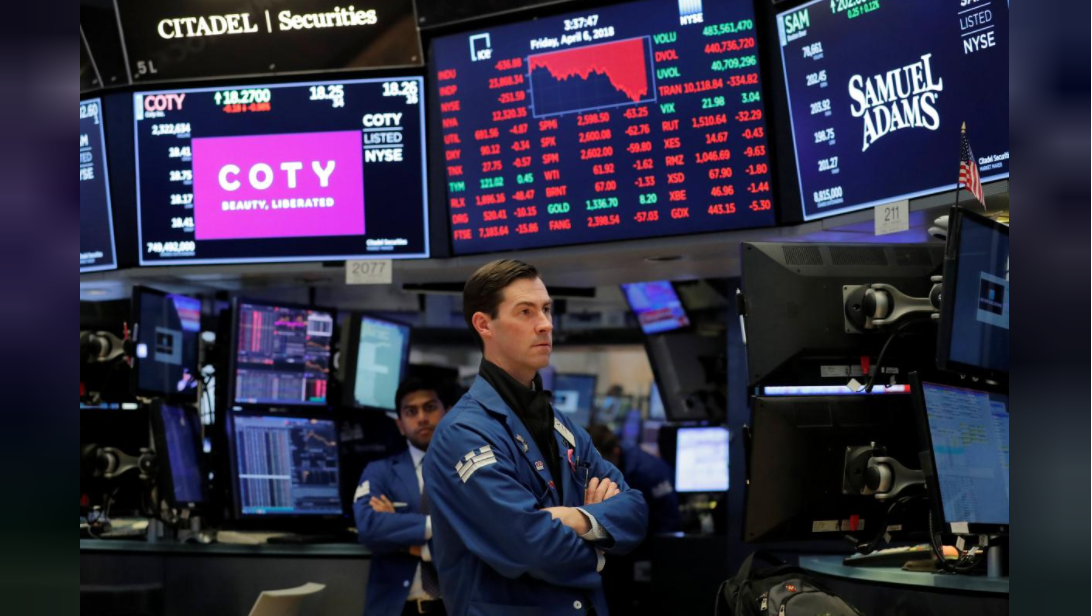 US stocks dropped about 2 percent on Friday, with the Dow falling more than 570 points, as US President Donald Trump’s latest tariff threat on Chinese imports fueled increasing concern over a USUS trade war with China.

Stocks added to losses and hit session lows in afternoon trading after Federal Reserve Chairman Jerome Powell said the US central bank will likely need to keep hiking interest rates to keep inflation under control and said it was too soon to know if rising trade tensions would hit the US economy.

Fears of a trade war since Trump announced tariffs on steel and aluminum imports more than a month ago have kept investors on edge over concerns that such protectionist measures would hit global economic growth.

“It’s a reaction to concerns about the administration’s approach to trade. The market has vacillated between writing it off as just talk and assuming there could be a serious problem,” said Rick Meckler, president of investment firm LibertyView Capital Management in Jersey City, New Jersey.

He and others said investors also appeared to be reducing risk ahead of the weekend.

“If the market is down it often tends to accelerate on Friday. Investors don’t want to take the risk of coming in Monday after having something happen over the weekend,” Meckler said.

Trump late Thursday threatened to slap $100 billion more in tariffs on Chinese imports, while Beijing said it was fully prepared to respond with a “fierce counter strike”.

US companies seen as more likely to be hit by trade tensions with China were among the biggest drags on the Dow, including Boeing (BA.N), down 3.1 percent. The S&P 500 industrials index .SPLRCI, down 2.7 percent, had the biggest losses among sectors, though selling was broad-based.

Chipmakers, which as a group rely on China for about a quarter of their revenue, also declined. The Philadelphia semiconductor index .SOX fell 3.1 percent.

The trade war worries continued to pressure stocks even as Trump administration officials sought to dampen concerns. Trump’s top economic adviser Larry Kudlow said in various interviews that he learned of the new tariffs on Thursday night, but also said there are ongoing talks on trade between the United States and China.

US Treasury Secretary Steve Mnuchin in an interview on CNBC said he was cautiously hopeful the United States will reach an agreement with China on trade.

The S&P 500 ended just above its 200-day moving average after trading well below that key support level that is watched by technical analysts.

Powell, who was speaking on the US economic outlook in Chicago, also said the labor market appeared close to full employment. It was his first speech on the economic outlook since taking over as chairman on Feb. 5.

Before the session started, a Labor Department report showed nonfarm payrolls increased by a smaller-than-expected 103,000 last month. While annual growth in average hourly earnings rose to 2.7 percent, it stayed below the 3 percent that economists estimate is needed to lift inflation toward the Federal Reserve’s 2-percent target.

“There was a hope that if he had a more dovish tone that that might be a counterbalance to the trade headwinds out there,” said Michael O’Rourke, chief market strategist at JonesTrading in Greenwich, Connecticut.

Facebook (FB.O) share were down 1.3 percent. It backed for the first time proposed legislation requiring social media sites to disclose the identities of buyers of online political campaign ads and introduced a new verification process for people buying “issue” ads, which have been used to sow discord online.

Declining issues outnumbered advancing ones on the NYSE by a 3.77-to-1 ratio; on Nasdaq, a 3.59-to-1 ratio favored decliners.

About 7.2 billion shares changed hands on US exchanges. That compares with the 7.3 billion daily average for the past 20 trading days, according to Thomson Reuters data.