HEADLINE Washington should be sincere in Kim-Trump summit

Washington should be sincere in Kim-Trump summit 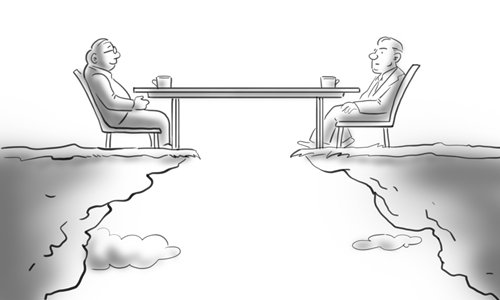 The ongoing rapprochement on the Korean Peninsula has enhanced after US President Donald Trump agreed to meet North Korean leader Kim Jong-un in May. Kim paid an unofficial visit to China and met President Xi Jinping weeks before planned summit meetings with South Korean and US leaders.
Kim told Xi Pyongyang was "committed to denuclearization" and was willing to have a dialogue with South Korea and the US.
Kim's Beijing tour ahead of his meeting with Trump reinforces Washington's belief that the US and its allies' efforts to pressure North Korea are effective. Trump posted on Twitter that he was keen to meet Kim.
Despite harboring mixed feelings, South Korea hailed the warming of ties between Beijing and Pyongyang. The upcoming inter-Korean summit and Kim-Trump meeting are stirring concern in Japan about its diplomatic nightmare - being left out in the cold.
As the US-North Korea summit approaches, all the previous Six-Party members are unwilling to be excluded from the endeavor to abandon nuclear programs in North Korea and achieve peace and stability in Northeast Asia.
Most observers believe that China is key to directing the situation on the peninsula and Kim benefits from his visit to China. At this subtle moment, nobody, except for a few hard-liners, is creating obstacles for the Kim-Trump meeting and the peninsula is expected to witness a turning point. Mike Pompeo, Trump's nominee for US secretary of state, is reportedly responsible for arranging the upcoming summit.
However, doubts and suspicion still linger. Some American analysts are pessimistic about the prospect of denuclearization on the peninsula. They accuse North Korea of being insincere in previous talks, arguing many well-conceived agreements are left ineffective as a result of North Korean obstinacy.
The Agreed Framework signed in October 1994 was the best compromise made between the US and North Korea. However, it effectively broke down in 2003 as George W. Bush labeled North Korea in his first State of the Union address as part of an Axis of Evil. The US threats are a major driving force in North Korea's pursuit of nuclear weapons. Therefore, the US has no moral ground to criticize North Korea's insincerity.
After the Cold War, Washington has always ignored Pyongyang's security concern. Instead, the US has frequently listed North Korea as a state sponsor of terrorism and slapped economic sanctions against it beyond the UN framework.
In recent years, Washington and Seoul have scaled up joint military drills. After Trump took power, US rhetoric of resolving the North Korean nuclear issue through military means has reached a new level.
Pyongyang feels cornered by the threats of the US and its allies and has vehemently developed its nuclear programs. The country is bearing unprecedented isolation and sanctions after rounds of nuclear and missile tests. Therefore, this time North Korea seeks a change by agreeing to hold summits with South Korea and the US.
The Kim-Trump summit, if convened, will bring about two possible scenarios. The US would ask North Korea to dismantle nuclear and intercontinental ballistic missile programs without conditions and reject Pyongyang's proposal of a phased resolution to its nuclear programs. Kim would request Trump to stop sanctions against it to achieve normalization of ties with Washington.
It is also likely that Trump would accept North Korea's proposal to freeze its nuclear and missile programs and require North Korea to improve its human rights. Kim would ask for a reduction in sanctions and strive to turn the armistice into a peace treaty. In this case, a package of agreements may be reached during the summit.
As the incoming US secretary of state is a hard-liner on North Korea, voices calling for a war against Pyongyang will be on the rise if the summit collapses.
Frankly speaking, North Korea has limited leeway and the US has more say. Therefore, the Trump administration needs to demonstrate sincerity in negotiations with North Korea.
The author is director of the Department of International Political Science, College of Political Science and Public Management, Yanbian University