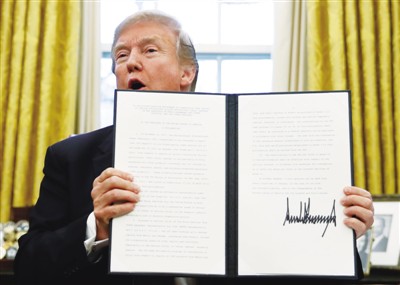 One of the focal points in the China-US trade conflict is the US' accusation that China infringes upon its Intellectual Property (IP) rights, which is also the direction of the 301 investigation. Through the Western media, the US promotes the accusation that China steals US technology, trying to create an impression that China's modernization was achieved through theft. This is actually a big lie.

Washington, regarding the US as a major owner of IP rights, believes that China's technological progress has benefitted from China-US economic cooperation and that the US has suffered a major loss. In fact, IP rights are owned by different companies and when they enter the Chinese market, they will weigh the gains and losses and sign the most profitable contract possible. It's impossible for them to engage in cooperation that would hurt their interests.

Quite often US companies do not provide their most advanced technologies when forming joint ventures with Chinese firms. The technology they provide includes computer, automobile, medical equipment and pharmaceuticals, which China can acquire from other Western countries if not the US. By offering such technologies, these companies receive generous paybacks.

Market itself is power. The US possesses unique and advanced technologies, and often refuses to make concessions in forming joint ventures in China, as is the case with Intel and Boeing. For companies trying to sell products with less advanced technologies, they have to accept certain terms from Chinese authorities to stay competitive in the Chinese market. This is how a market economy works and there is no room for the Trump administration to forcefully change the rules.

After four decades of reform and opening-up, China has laid a solid foundation for scientific and technological research. Many Chinese companies are now able to compete with Western firms in many sectors. Chinese people's wisdom and diligence played a key role in the country's rise in technology and innovation. Washington has no way to reverse the trend.

The US is not the master of the world. The Trump administration hopes that the US can forever lead in every major sector. This requires US companies to work harder and continue coming up with new innovations. As long as US products are sold, the world will keep learning about the relevant technology in accordance with the IP law.

The Trump administration wants to suppress the "Made in China 2025" plan and China's innovative capabilities. Washington also wants to ally with other Western countries. This is a naïve idea that ignores both China's creativity and the fundamental rules of international commerce. It can only be an empty slogan.