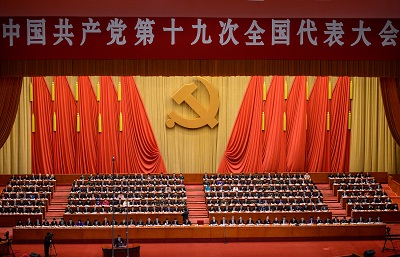 The 19th National Congress of the Communist Party of China (CPC) convenes Wednesday. The Congress is an important chance for the outside world to further understand the CPC and a deep knowledge of the CPC is a shortcut and key to comprehensive knowledge of China. The West on the whole is quite concerned about the CPC, but some Westerners still hold ideological views on it.

The CPC has more than 89 million members, exceeding the population of Germany. It is not a loose-knit interest group revolving around elections, like a party in the West, but the blood and bones of China's national operating mechanism, and the source of the whole country's cohesion and mobilization.

Compared with Western political parties, the CPC has distinctive characteristics. Firstly, the CPC is well-structured, highly disciplined and emphasizes unity, and thus it is swift in action. Party discipline is prioritized over the law, highlighting the unusual status of discipline in the CPC's internal governance. The Central Commission for Discipline Inspection has played a vital role in curbing corruption since the 18th CPC National Congress, further underlying the seriousness of Party discipline.

Secondly, the CPC is diligent and willing to sacrifice. The majority of Party members are advanced elements in their field, working around the clock, and this is the foundation of the CPC's advancement. Being willing to contribute is the CPC's requirement of all its members. The majority of the most arduous and difficult work of China is completed by CPC members. The CPC's fundamental principle of serving the people wholeheartedly determines that corrupt officials are sooner or later kicked off the team.

Thirdly, the CPC is not dogmatic, and seeks truth from facts. It has the capacity for self-reflection and the spirit of reform. The CPC is willing to learn advanced experience from all over the world. This ensures China progresses. Since its establishment, the CPC has faced a changing domestic and international environment and an evolving political situation. Despite twists and turns, the CPC's general strategic direction meets the needs of the times.

Fourthly, the CPC has a strong sense of mission. It is well-grounded and yet visionary. The CPC is the legacy of Chinese history, born in a time of agony for China and yet an idealistic party. It is a tenacious team, difficult to beat.

The CPC underwent extreme tests in its history. Since the beginning of the People's Republic of China, the CPC has made great achievements, but its rule was also troubled by several serious mistakes. Fortunately, it managed to correct these mistakes.

Today's CPC is a mature political party with rich governing experiences. Through its nearly 70 years of rule, the world has witnessed crisis in the West, the collapse of the socialist bloc in Eastern Europe and the Soviet Union, and political turbulence in the Third World. But China has withstood all these ups and downs.

The CPC has a new vision as China has grown to become the world's second-largest economy. The CPC has the tradition of connecting with the masses and overcoming difficulties. It is fully integrated with Chinese society and its governance is backed by a complete legal system. The Chinese public's support for the CPC cannot be measured using Western parameters.

More and more people in the West feel the necessity to have a fresh understanding of the CPC and China. They realize that a new system is emerging. It is hoped that broader communication can thus be started.