HEADLINE What entrepreneurs are saying during the two sessions

What entrepreneurs are saying during the two sessions 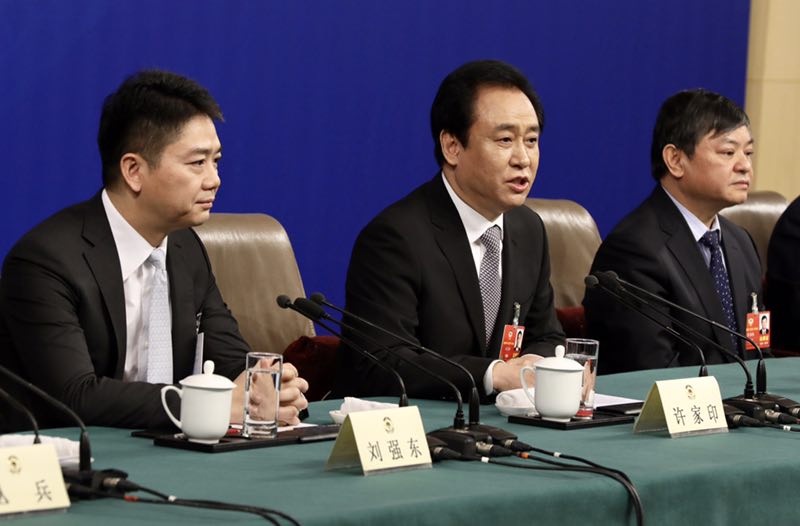 Xu Jiayin, a member of the 13th National Committee of the Chinese People's Political Consultative Conference and chairman of China's property developer Evergrande Group, speaks at a press conference for the ongoing first session for the committee in Beijing, March 10, 2018. [Photo by Zhu Xingxin/chinadaily.com.cn]

Chinese private companies need to make more effort to help with poverty alleviation in rural areas, as the country steps up its push for the ambitious plan to lift all citizens out of poverty by 2020, said Xu Jiayin, chairman of China's leading property developer Evergrande Group.

"The key to poverty alleviation is supporting rural industries, and relocating villages, as well as training migrant laborers. To implement these projects, we also need to know how to communicate with locals." 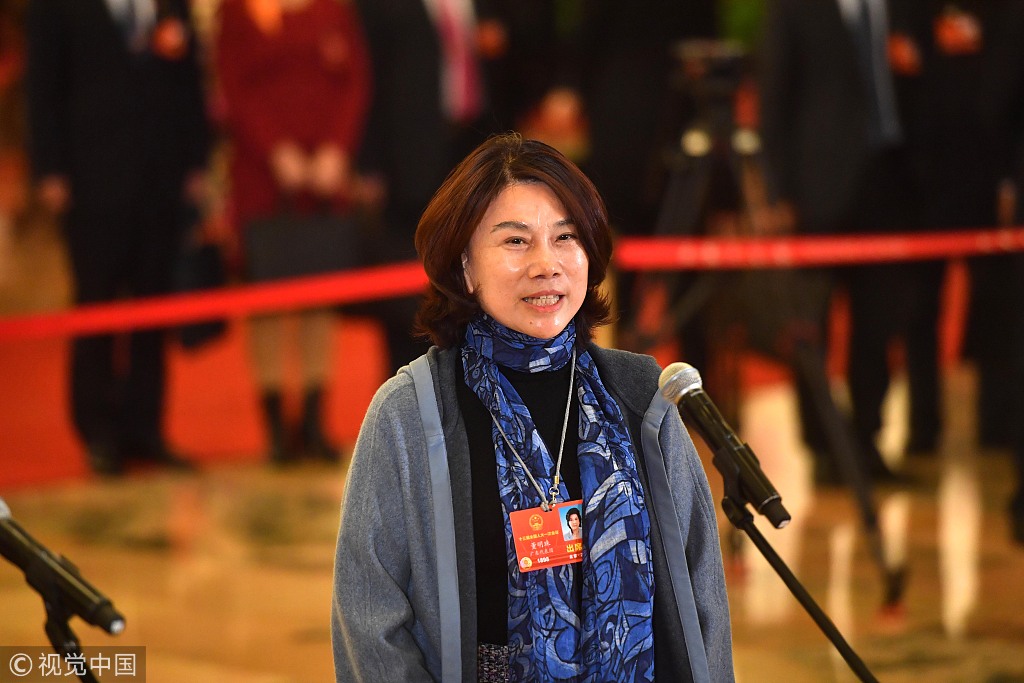 Dong Mingzhu, chairwoman of Gree Electric Appliances and a deputy to the 13th National People's Congress, makes a presentation at the first session of NPC in Beijing, March 9, 2018. [Photo/VCG]

"We have eight production bases in China, most of which are now unmanned factories. We will ramp up resources to develop more core technologies." 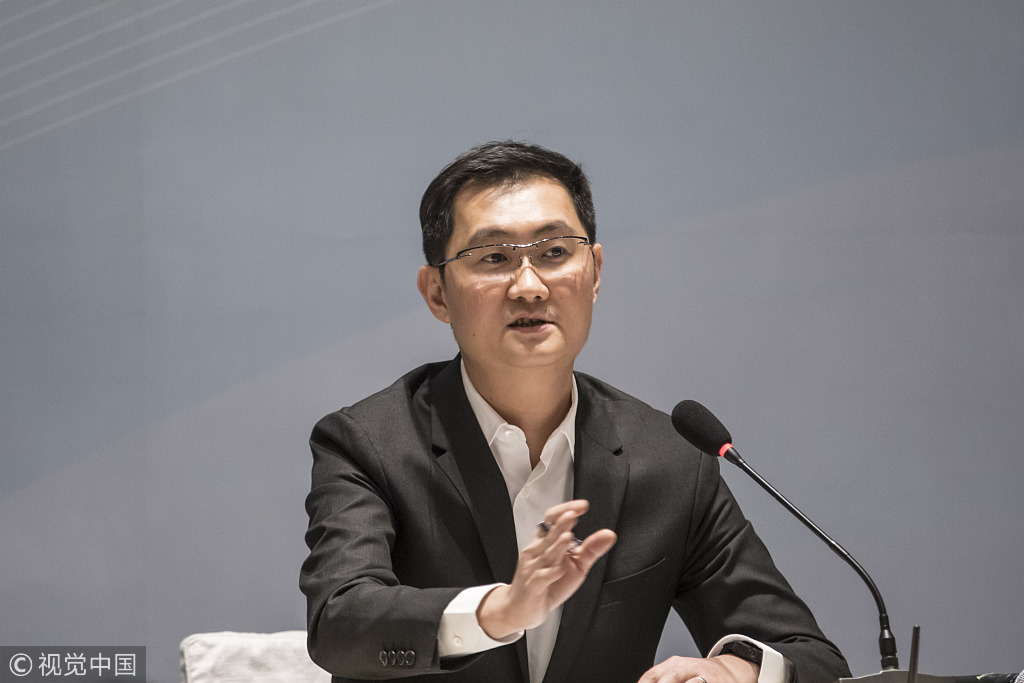 Pony Ma Huateng, chairman and chief executive officer of Tencent Holdings Ltd and a deputy to the 13th National People's Congress, speaks during a news conference in Beijing, March 3, 2018. [Photo/VCG]

Ma acknowledged blockchain as an innovative technology, but remained concerned about initial coin offerings (ICOs) and digital currencies, which he thinks have many risks, as reported by Beijing Morning Post.

"If everyone could make their own currency as they wanted by taking advantage of blockchain, this will spell serious trouble for regulators. For now, though it's very hot, we [Tencent] haven't participated, and haven't considered releasing our own currency." 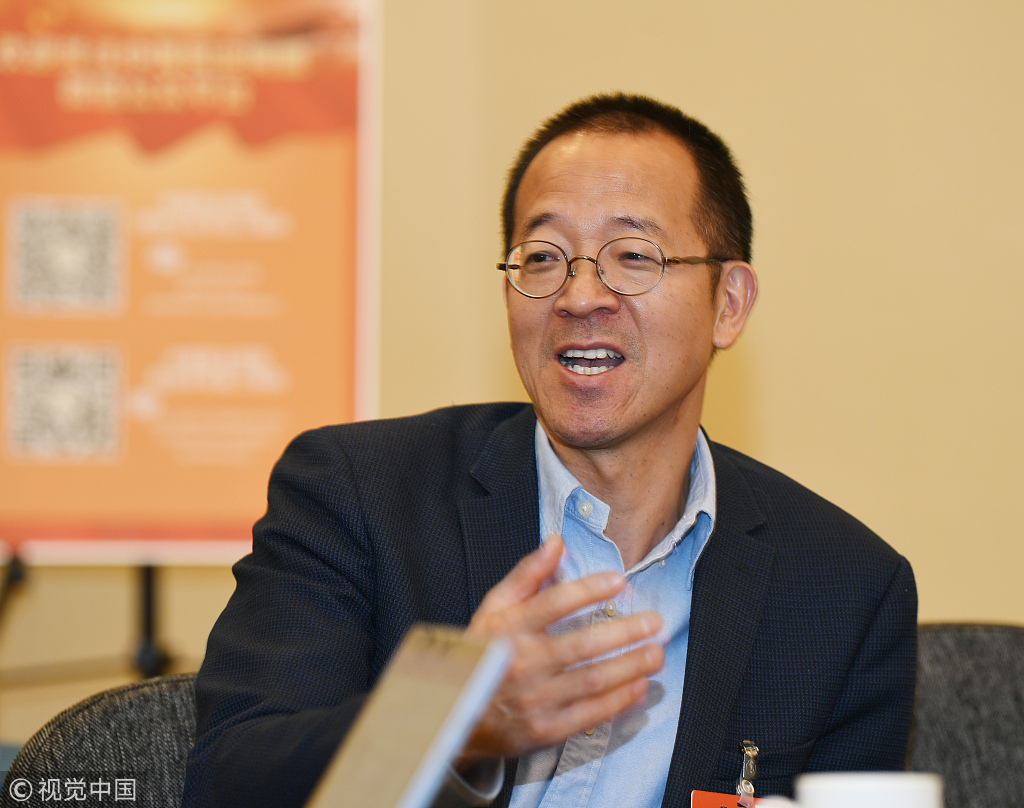 Yu is against young children being educated in a way that pushes them beyond what children at their age should learn. "Teaching a 6-year-old child something that should be learned at the age of 15" goes against the principles of human development, he said.

At the same time, he added that private educational institutions well supplement China's educational system, but it also is necessary to regulate the market. 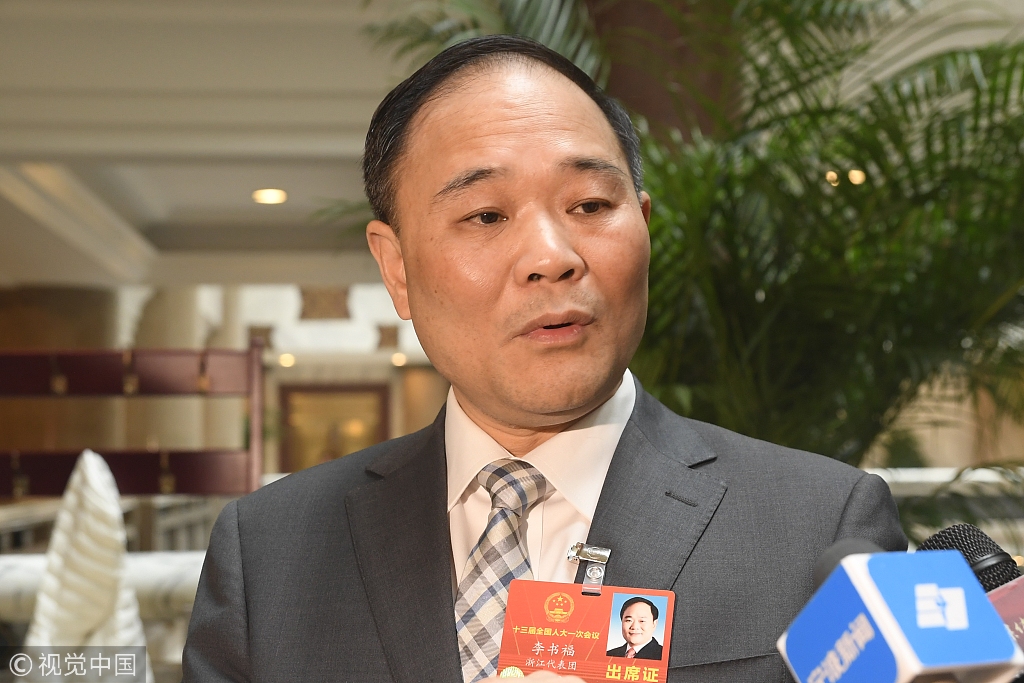 Li Shufu, chairman of Zhejiang Geely Holding Group and a deputy to the 13th National People's Congress, accepts an interview in Beijing on March 6, 2018. [Photo/VCG]

Li said that methanol-fueled cars are one of the approaches to deal with energy and environmental challenges, according to weekly magazine Oriental Outlook, managed by Xinhua News Agency.

Methanol, as a fuel, has its advantages, such as convenient transportation and lower-cost supporting facilities. Li proposed pushing methanol-fueled cars into the market as soon as possible, supporting better related infrastructure and management, and adding methanol into transportation fuel system as a strategic alternative energy source. 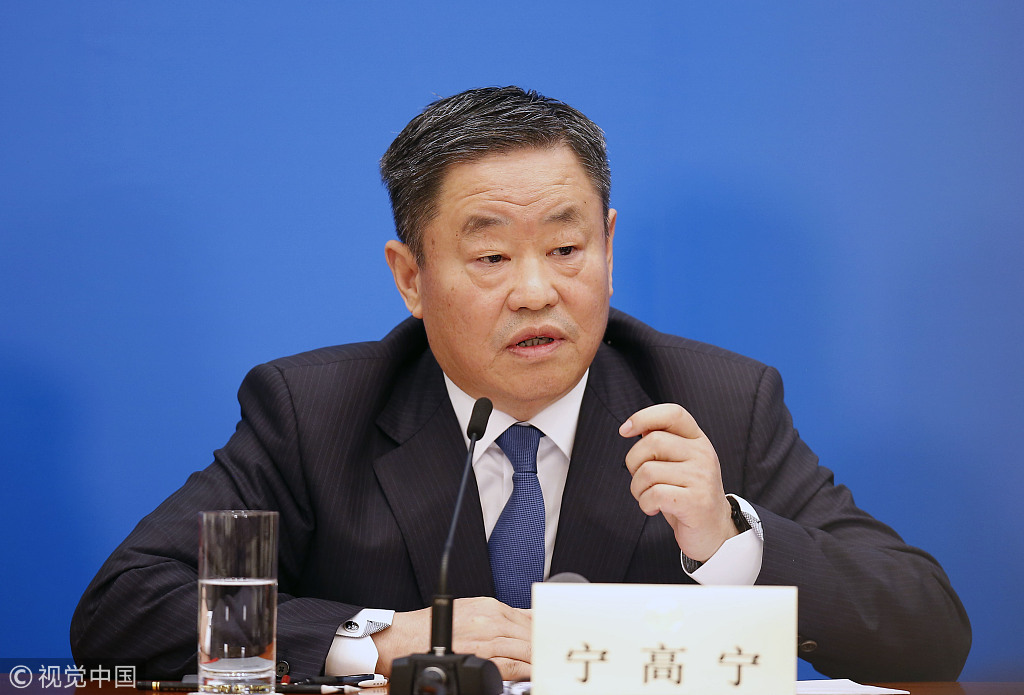 Ning Gaoning, chairman of the State-owned Sinochem Group and a member of the 13th National Committee of the Chinese People's Political Consultative Conference, speaks at a press conference in Beijing, March 8, 2018. [Photo/VCG]

Ning said he is optimistic about the future of manufacturing upgrading in China, and both market and policy have played important roles in the progress.
"Supply-side structural reform has played a vital role," he said. "As well as the government support, in industry, technology and tax aspects, are all bringing profound changes to the sector. I believe the ongoing manufacturing upgrading in the country will be similar to the internet technology industry and see a big leap in the coming years." 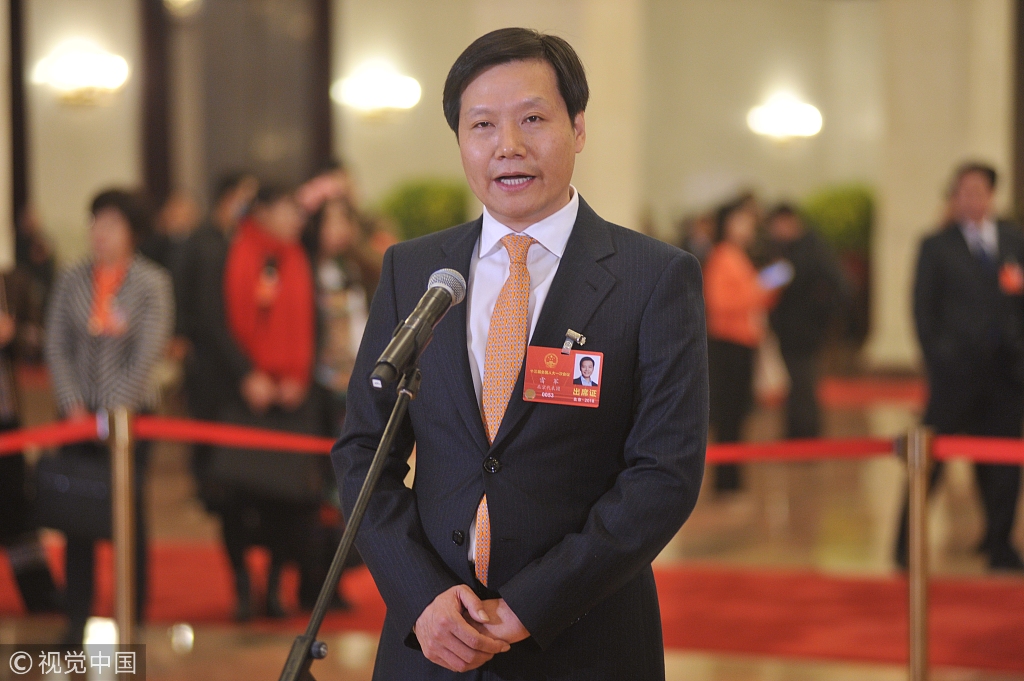 Lei Jun, founder and CEO of Xiaomi Corp and a deputy to the 13th National People's Congress, makes a presentation at the NPC's first session in Beijing, March 9, 2018. [Photo/VCG]

"There is a gap between China's design industry and those of foreign countries, because of our relatively weak industrial foundations and lack of high-end talent." 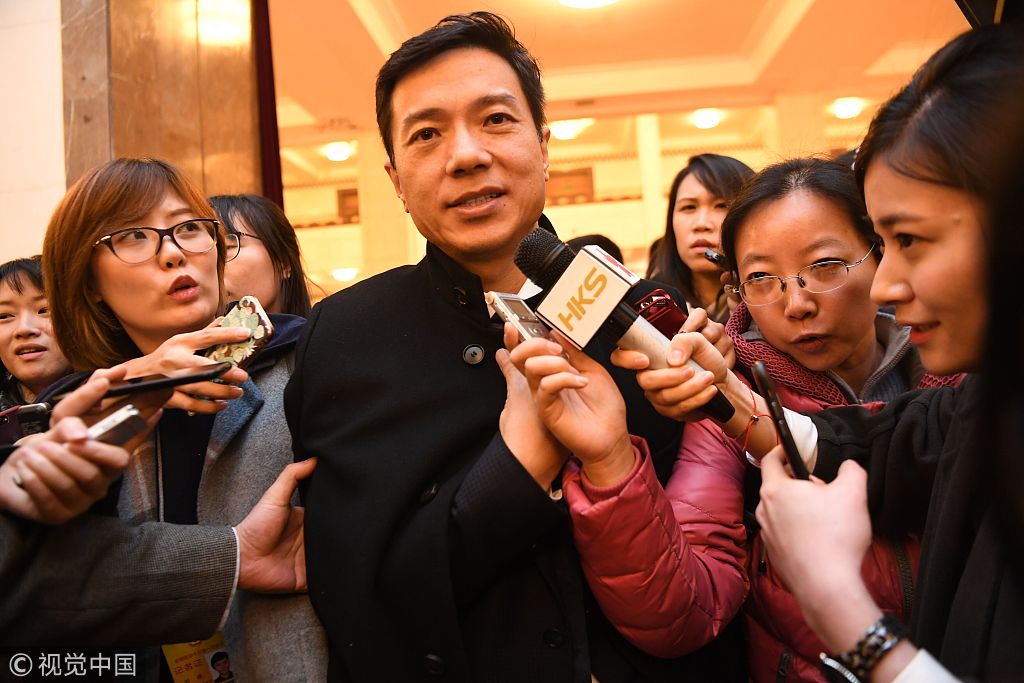 Robin Li, chairman of Baidu Inc and a member of the 13th National Committee of the Chinese People's Political Consultative Conference, accepts an interview in Beijing, March 3, 2018. [Photo/VCG]

Li said that he was hopeful that his company would be able to list on the domestic stock exchanges as its major users and markets are in China, and it would be ideal if the major shareholders also are in China.

He pointed out that the reason why Baidu went public in the United States was because the policy did not allow it to list in the domestic bourses at that time. The variable interest entity structure of Baidu is a foreign-funded company from the perspective of Chinese law, and there are still policy barriers to this issue.

"Whenever the policy allows Baidu to come back, we certainly hope that we can return to the domestic stock market as soon as possible," Li added. 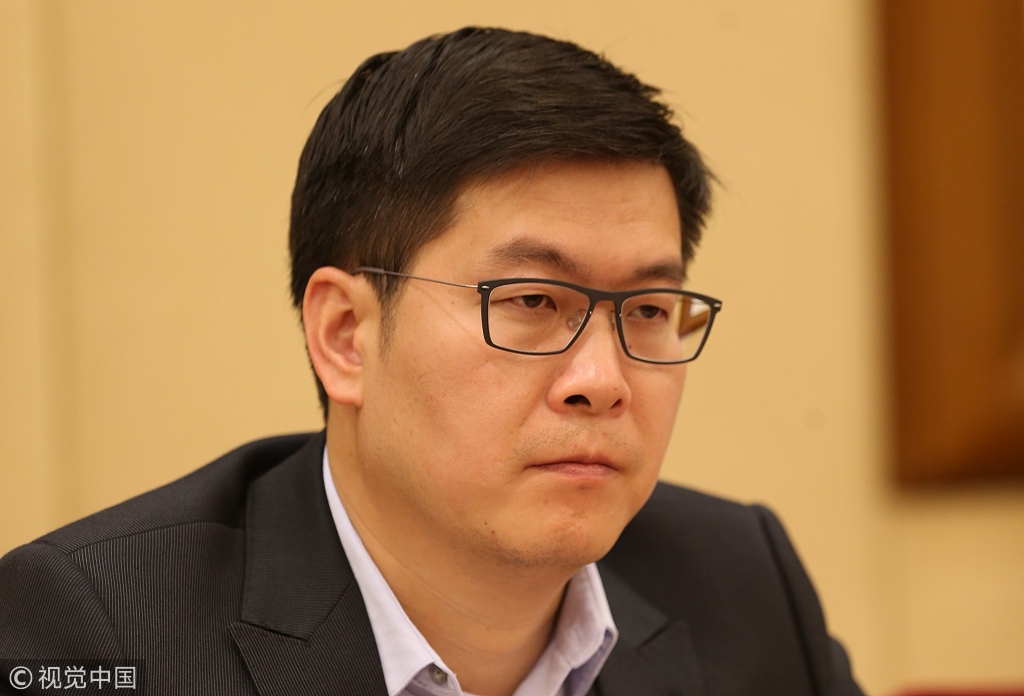 Yao was sanguine about the potential of blockchain in the long run, but he said he expects more services based on the technology to further push social development, according to Beijing Morning Post.

Now, a large amount of new coin issuance by taking advantage of blockchain could create financial risk, or even impede blockchain's own development as a whole, he said. 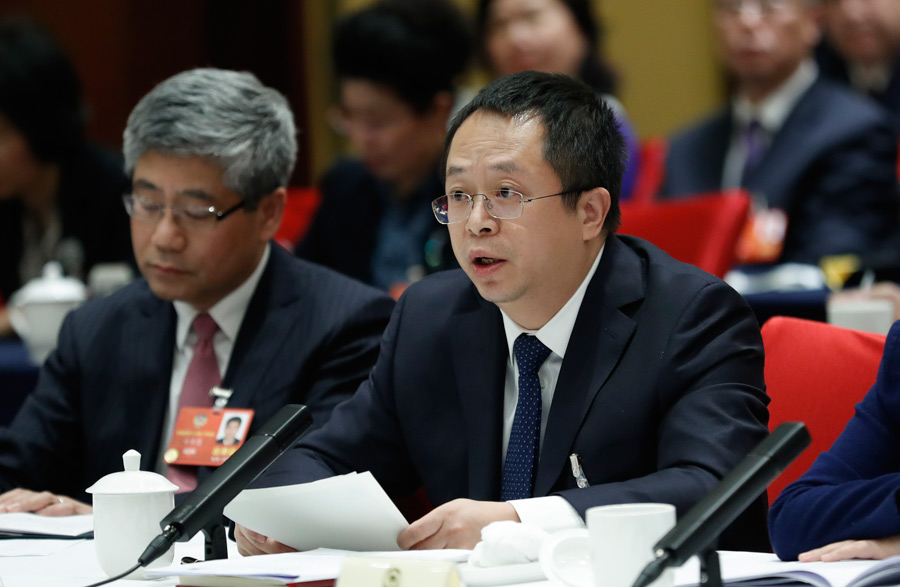 Zhou Hongyi (right), a member of the 13th National Committee of the Chinese People's Political Consultative Conference, speaks at a panel discussion in Beijing on March 4, 2018. [Photo/China News Service]

China should set up more education and training institutions to cultivate cybersecurity talent, as the country faces a huge talent gap in this sector, said Zhou Hongyi, chairman and CEO of 360 Security Technology Inc.

"I hope the government will encourage internet security companies to take part in the vocational education of cybersecurity," Zhou said.

"The software and hardware that may lead to disclosure of user's privacy, especially in products like the internet of things and intelligent vehicles, should be recalled compulsorily if they have great safety loopholes to avoid greater losses," said Zhou. 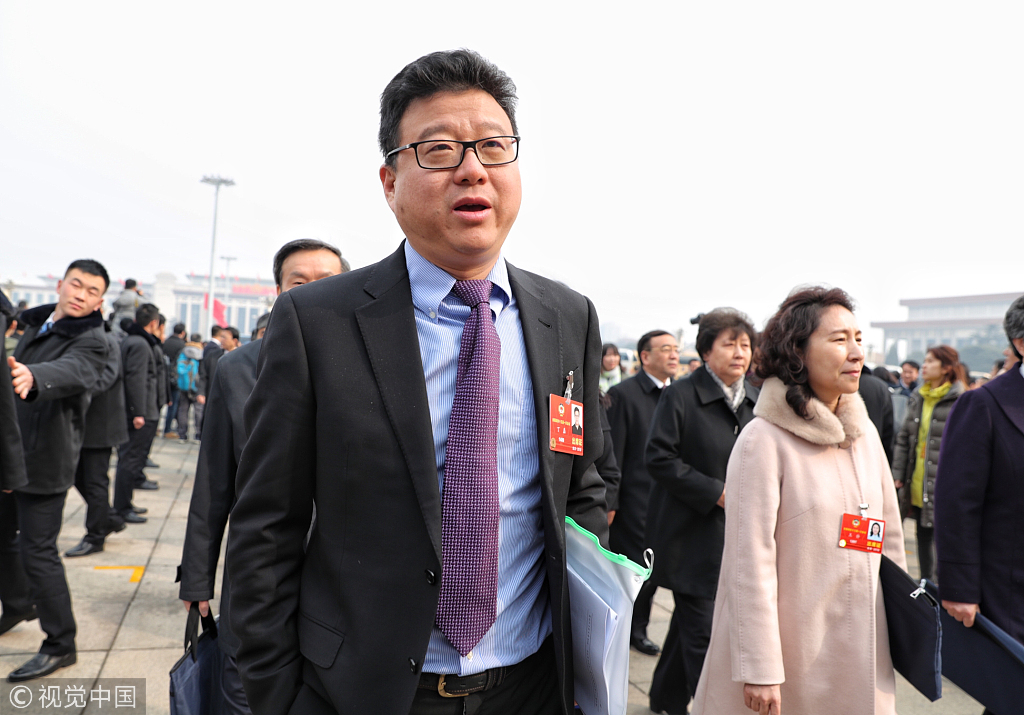 Ding Lei, CEO of NetEase and a member of the 13th National Committee of the Chinese People's Political Consultative Conference, leaves the Great Hall of the People in Beijing, March 3, 2018. [Photo/VCG]

Ding said that government should establish a traceability organization with public credibility, and it is unpersuasive for food companies to trace their products for themselves, according to China.org.cn.

He acknowledged that government pays strong attention to food safety, but he noted that there is room for legislative and supervisory improvement.