HEADLINE Where did you get your tree? Child climbers in Georgia risk lives for Christmas

Where did you get your tree? Child climbers in Georgia risk lives for Christmas 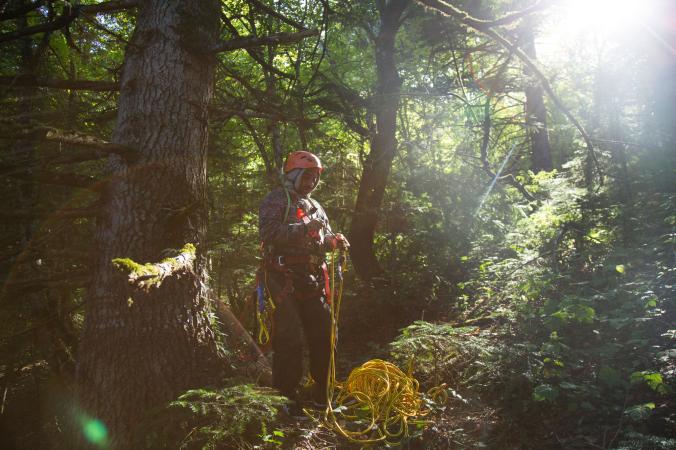 Kakha Kobakhidze, a cone picker with Fair Trees, readies his ropes to climb a Nordmann fir in a forest in the Republic of Georgia. (Photo:  National Geographic)

As European families gather round the twinkling lights and evocative woody aroma of their Christmas trees this festive season, few will think about where they came from.

But in one of Georgia's poorest regions, child climbers risk their lives to harvest seeds to grow the Nordmann fir, Europe's most popular Christmas tree thanks to its scent, dark green needles and even profile, say campaigners and residents.

Children as young as 10 climb trees that can reach 50 meters in height in northern Georgia's Ambrolauri Forest, where most Nordmann seeds originate, to collect cones.

"I know that children are climbing. Parents come to me and ask me in September to let their children miss lessons because they are helping their fathers in the forest to collect cones," Marina Gociridze, head teacher of a local village school.

"They are competing with each other who climbed higher and who collected more cones," she said by phone from the small village of Tlugi in Georgia's Racha-Lechkhumi region in the foothills of the towering Caucasus mountains.

The annual harvest season in September is a massive boon for the residents of Tlugi and nearby villages, attracting several hundred workers each year.

Seeds are then extracted from the cones and exported to growers and nurseries, where they will take 11 years to reach maturity.

Growers sell directly to consumers or supply retailers ranging from small growers to big garden center chains. In Britain, Nordmann Firs can cost from 40 pounds to more than 100 pounds ($55 to $135).

Ambrolauri Forest is divided into plots, which the government licenses to private companies, who employ contractors for harvesting.

But in practice, local people, driven by poverty, often ignore the licensing arrangement and collect cones throughout the forest, selling them in bulk to middlemen for just 1 lari (40 cents) per kilo, said Gociridze. 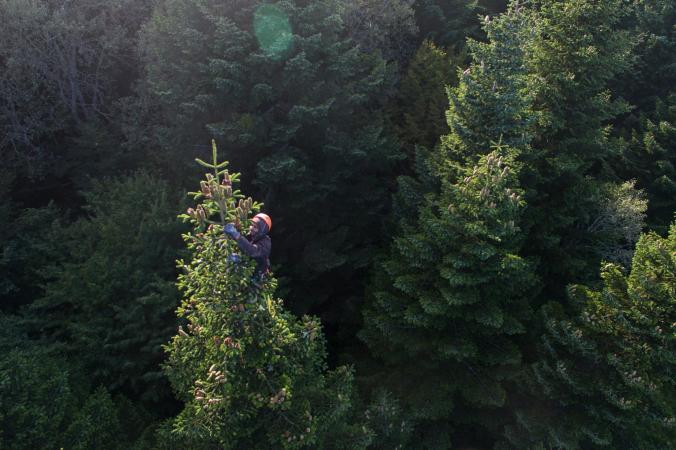 Unlike the Fair Trees crew, many other cone pickers climb with no ropes or safety gear, increasing the risk of fatal falls. (Photo:  National Geographic)

The lines between regulated and unregulated picking are often blurred, as buying and selling by middlemen obscures the provenance of cones, according to locals in the industry.

Climbers often forego ropes and safety harnesses, which obstruct and slow movement between branches, said several people who have witnessed the practice.

"These guys climb the trees like monkeys," said Adrian Morgan, owner of Snowbird Christmas Trees, one of the UK's largest Christmas tree nurseries, who has visited the forest to source seeds from a licensed Georgian partner.

Officials from Georgia's National Forestry Agency did not respond to requests for comments by phone and email.

"The government must ... make investors obliged to make better working conditions for those people who risk their lives," said Rati Namgaladze, former mayor of the historic city of Ambrolauri, just outside the forest.

Namgaladze's brother died while attempting to jump between trees in 1994, leaving behind a wife and two-year-old daughter.

License holding companies have improved safety standards since his brother's death, he said, but said locals still collect in a "chaotic" way, and are poorly paid by middlemen.

Deaths were common in the 1990s, when Georgia's post-Soviet economy collapsed, and the most recent fatality was in 2012, according to the founder of Fair Trees, which sells about 30,000 Christmas trees each year in Germany and Denmark.

Established by Danish campaigner and grower Marianne Bols in 2009, Fair Trees provides its staff in Ambrolauri with training, safety equipment and a per kilo price of around 5 lari ($2), four to five times the going rate, Bols said.

"No one can imagine how poor people are and under which unacceptable conditions people live," Bols told the Thomson Reuters Foundation. "(There are) no sewerage systems in the villages. Toilets are a hole in the ground."

A small surcharge on each tree sold by Fair Trees goes to sponsor students and a free dental clinic for children.

One, a 12-year-old, told Bols on a visit in September he had been climbing trees for two years with his family, she said.

Other European buyers have yet to follow their lead, Bols said, and the tradition of child tree climbers looks set to continue.

"These children are so proud," said headteacher Gociridze. "They are making Christmas for the children of Europe."