HEADLINE Where will President Mugabe go?

Where will President Mugabe go? 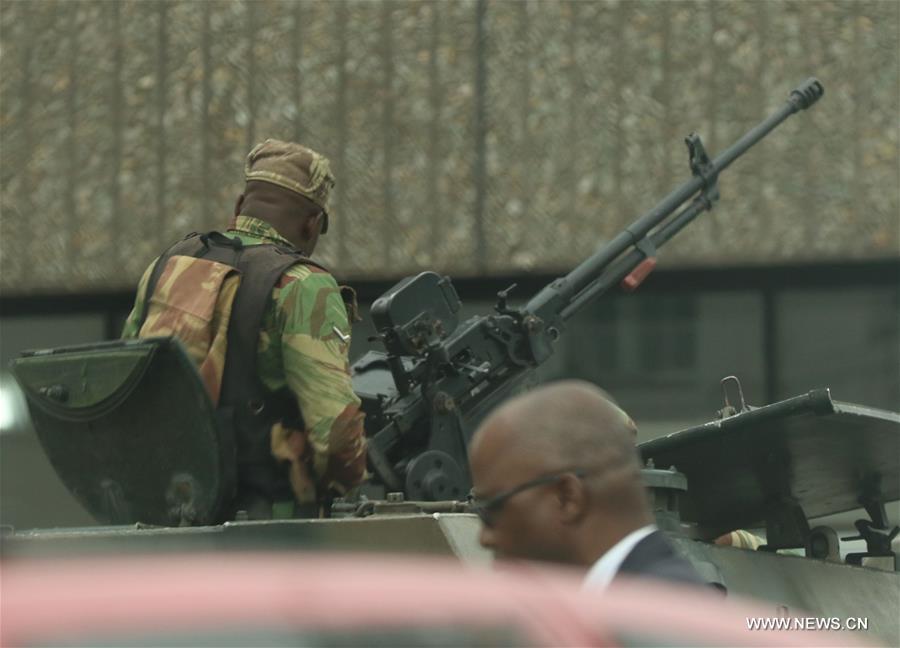 A soldier is seen on an armed vehicle in the city center of Harare, Zimbabwe, Nov 16. Calm and peace have been urged for Zimbabwe where the military announced on Wednesday that it has taken control of all government institutions in the southern African country. (Photo: Xinhua/Stringer)

While the world waits to see what's next for Zimbabwe a day after the military takeover, the situation remains uncertain as President Robert Mugabe remains under house arrest, as reported by media, and has failed to make an official announcement since events unfolded on Wednesday.

According to the South African Department of International Relations and Cooperation, two South African ministers arrived in Zimbabwe on Wednesday to meet with authorities. South African President Jacob Zuma also called on Wednesday for calm and restraint, adding that he hopes Zimbabwe's military "will not move and do more damage."

The Southern African Development Community (SADC) will also hold an emergency meeting in Botswana on Thursday.

Meanwhile, "there are active talks underway to form a transitional government" that will include the opposition party, CNN reported, citing a senior opposition source.

Amid talks to resolve the country's political turmoil, analysts said the end of Mugabe's decades-long rule over Zimbabwe looms, as he is reportedly expected to hand over power "imminently" to his former vice president Emmerson Mnangagwa. What will happen to the 93-year-old president, the world's oldest incumbent president and Africa's longest serving leader since World War II, after the turmoil?

To his followers, Mugabe was a revered hero who fought with his African nationalists to defy the unfair rule of the white minority. The former school teacher was jailed for 10 years for embracing Marxism and calling for an independent black-governed state.

To his enemies and detractors, he is a brutal dictator who seriously mismanaged Zimbabwe's economy for decades. His drastic land policy, which forced thousands of white farmers to give up their land, resulted in an immediate food shortage in the early 2000s. The subsequent money-printing intended to finance imports only led to hyper-inflation that collapsed the country's economy.

For years, many young Zimbabweans had to seek employment in neighboring countries. Mugabe's political "dividend" for freeing Zimbabwe from British colonialism has been gradually eroded by his economic mismanagement. His foolish move last week, as media reported, to dismiss Mnangagwa to clear the way for his wife may have put the last straw on the already teetering regime. Analysts believe Mnangagwa's dismissal signaled his break even with most of his loyal allies in the ruling party.

Most Zimbabweans have not known a time without Mugabe, who has ruled since the country's independence from Britain in 1980. But when that day finally comes, what will Zimbabwe be and where will Mugabe go?

Only time can tell.