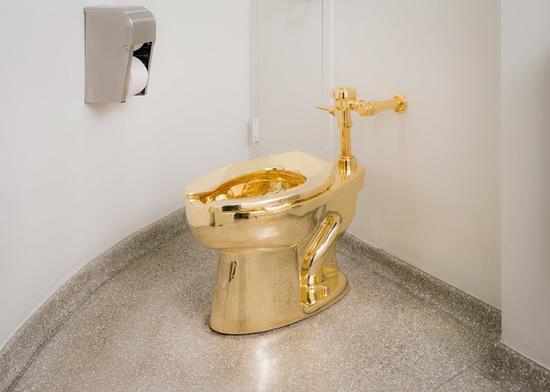 The Guggenheim Museum has reportedly declined a White House request to borrow a painting by Vincent van Gogh and has instead offered to loan one of its exhibits - a golden toilet.

In the email, the museum politely turned down the request and suggested offering contemporary Italian artist Maurizio Cattelan's piece titled "America" as an alternative.

"America" is a solid 18-karat gold toilet that was installed in September 2016 in one of the museum's public restrooms for all visitors to use "in a wonderful act of generosity," read the email.

The work, estimated to be worth more than 1 million U.S. dollars, channels the history of 20th-century avant-garde art by referencing Marcel Duchamp's 1917 artwork "Fountain," which is a urinal.

But with the exhibition over, the artist "would like to offer it to the White House for a long-term loan... should the President and First Lady have any interest in installing it in the White House," said the email.

The White House did not respond to inquiries about the matter, according to the Post.

Cattelan told the Guggenheim in a blog post at the time of his work's installation that he could hardly have known about the political rise of Trump when he conceived the piece.

Although the aesthetics of it recalls "nothing so much as the gilded excess of Trump's real-estate ventures and private residences," the artist noted that it shouldn't be the only interpretation of the piece.