She said in a press briefing that the United States keeps options "open" on whether to sanction Iran, hopes Pakistan will do more to stop terrorism and has not made its final decision on whether to support the DPRK's athletes participation in the Winter Olympics held in South Korea.

In recent days, Trump has accused the Iranian government of using its national wealth to support "foreign terrorism" and lashed out at Pakistan for not rendering enough help to Washington to hunt down Afghan terrorists.

He also said the United States "will see" whether the DPRK's offer to talk with South Korea and join in the upcoming Winter Olympics is "good news" or not. 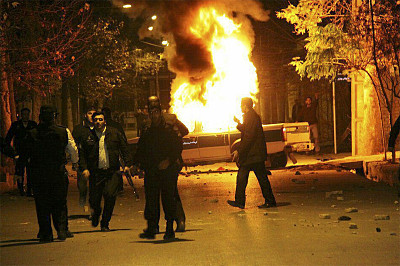 At least eight people were killed, dozens injured and scores arrested as protests against the government's economic policies continued in major cities across Iran over the past days.

Speaking of Trump's continuous tweets against Tehran over the protests, Sanders blamed the Iranian government for spending the people's wealth "on spreading militancy and terror abroad, rather than ensuring prosperity at home."

"The Obama administration was too restrained of the 2009 protests and said that won't happen again," she said. "President Trump is not going to sit by silently like President Obama did."

When asked whether the Iranian protests will renew Trump's desire to re-impose sanctions on Iran, she said the United States will "certainly keep our options open in terms of sanctions."

"In terms of signing a waiver later in January, the president hasn't made a final decision on that, and he is going to keep all of his options on the table in that regard."

For his part, Secretary of Iran's Supreme National Security Council Ali Shamkhani said Tuesday that certain countries are waging a "proxy war" against the republic, citing the United States, Britain and Saudi Arabia.

This foreign-backed intervention is aimed at hampering Iran's progress in different spheres, he said. "What is happening in Iran will be over in a few days, and there is no reason to worry at all."

According to Dan Mahaffee, senior vice president and director of policy at the Center for the Study of the Presidency and Congress, Iranian protests are fueled largely by economic discontent.

"Separate from the economic situation for the average Iranian, much of President Trump's rhetoric has been focused on his skepticism towards the international nuclear deal with Iran and the continued Iranian support for the Syrian government," he said.

"Given the history of past U.S. involvement in Iranian domestic politics, the best thing for the United States would be to ... do little to intervene or directly support these protests," he added. 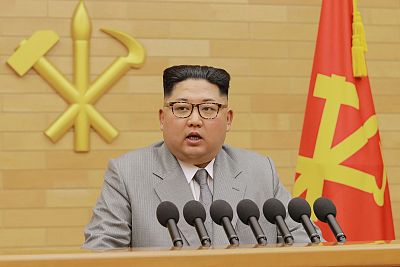 Speaking of the DPRK top leader Kim Jong Un's offer to talk with South Korea and send athletes to join in the upcoming Winter Olympics in South Korea, Sanders said the United States "haven't made a final determination on" whether to support that offer or not.

In his New Year's speech, Kim said the DPRK will take necessary measures to prepare to participate in the event, adding that the two sides should reduce the highly tense military confrontation to create a peaceful environment for reconciliation.

Later, Trump tweeted that "sanctions and 'other' pressures are beginning to have a big impact" on the DPRK.

"Perhaps that is good news, perhaps not -- we will see!" he said, referring to Kim's offer.

Sanders noted that the U.S. policy on the DPRK "hasn't changed at all," adding Washington "is committed and will still continue to put maximum pressure on the DPRK to change and make sure that it denuclearizes the Korean Peninsula."

The situation on the Korean Peninsula remained volatile throughout 2017, as the DPRK test-fired several ballistic missiles, including three intercontinental ballistic missiles, and the United States constantly conducted large-scale military drills with South Korea and has also four times voted for adopting resolutions against the DPRK to impose new sanctions.

U.S. WANTS PAKISTAN TO DO MORE TO STOP TERRORISM 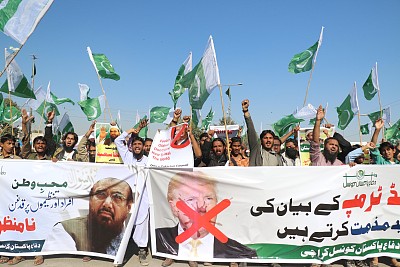 Trump raised eyebrows around the world on Monday by tweeting that Pakistan has "given us nothing but lies & deceit" in return for U.S. aid, accusing the nation of providing a safe haven to the terrorists Washington is hunting in Afghanistan.

In response, Pakistan summoned the U.S. ambassador in Islamabad late Monday to lodge a protest, saying Pakistan has taken action against all militant groups without any discrimination and its sacrifices are being ignored.

Speaking of Pakistan, Sanders said "we know that they can do more to stop terrorism, and we want them to do that. That seems pretty simple."

When asked about what prompted Trump's Pakistan tweet yesterday, Sanders only explained that Trump received daily updates and briefings.

"We know that Pakistan can do more to fight terrorism, and we want them to step up and do that," she added.