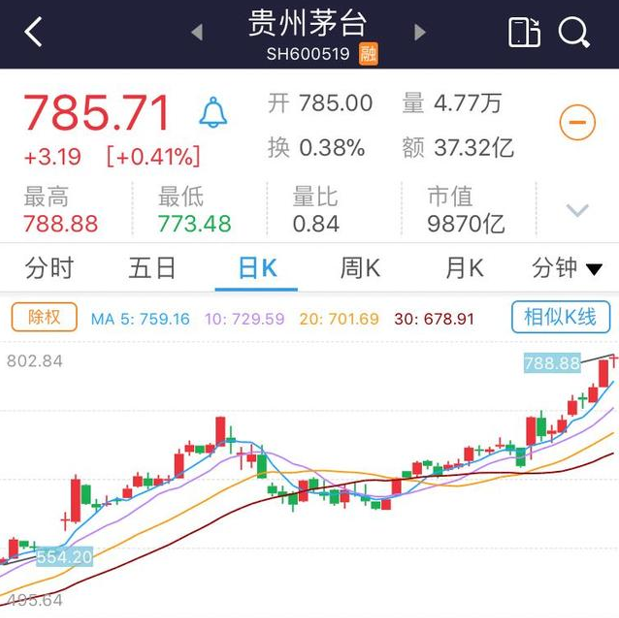 The closing price on Wednesday of Maotai stock reached 785.71 yuan, with a total market capitalization of 987 billion yuan ($151.4 billion), which is only one step away from the trillion mark. It means that Moutai’s market value has surpassed LVMH group, the largest luxury goods company in the world, whose total market value is $145.4 billion.

Given the rising market value of Maotai, the question is, why are Maotai’s share prices so high? Taking everything into consideration, there are three main reasons:

First, according to Maotai’s announcement about its operation in 2017 released last December, it was estimated that last year’s Moutai sales increased by 34% over the same period in 2016, and the total revenue was expected to reach more than 60 billion yuan, an increase of 50% over 2016. From the perspective of weighted average return on assets measure, Maotai’s return index has maintained over 10% for  16 consecutive years, proving that it fully deserves the title of a blue chip. Moreover, Maotai’s cash dividend index is leading in A shares, and its cumulative dividend amount is more than 43 billion yuan. Consequently, Maotai’s annual business performance provides a profit-making method for shareholders to make long-term investments.

In addition, Moutai’s surging share prices are boosted by its highly locked position in stock market. More and more public or private equities choose the locked position after buying Maotai’s shares—that is, to buy some chips and then hold on to them until a certain time when investors are about to increase share prices so as to reduce investors’ pressure and guarantee steady profits. Therefore, stocks of Maotai in the market become less and less, making its shares rare and precious, which finally drives the prices higher.

Last but not the least, Maotai’s top ten shareholders’ shareholding proportion is as high as 75.33%. The number of Maotai’s institutional investors has reached 574, accounting for 16.97% of the shareholding ratio. As a result, over 80% of shares are under the control of Maotai’s major shareholders and institutional investors, which are managed over a long-term and highly stable, guaranteeing the share prices of Maotai against a fall.

Although Moutai’s share prices are rather high at present, it is expected that this situation will continue to be promising in the future, and it is possible for Maotai to achieve a notable increase in both volume and prices this year.