HEADLINE Why nobody was killed by Tibet’s 6.9 magnitude earthquake

Why nobody was killed by Tibet’s 6.9 magnitude earthquake 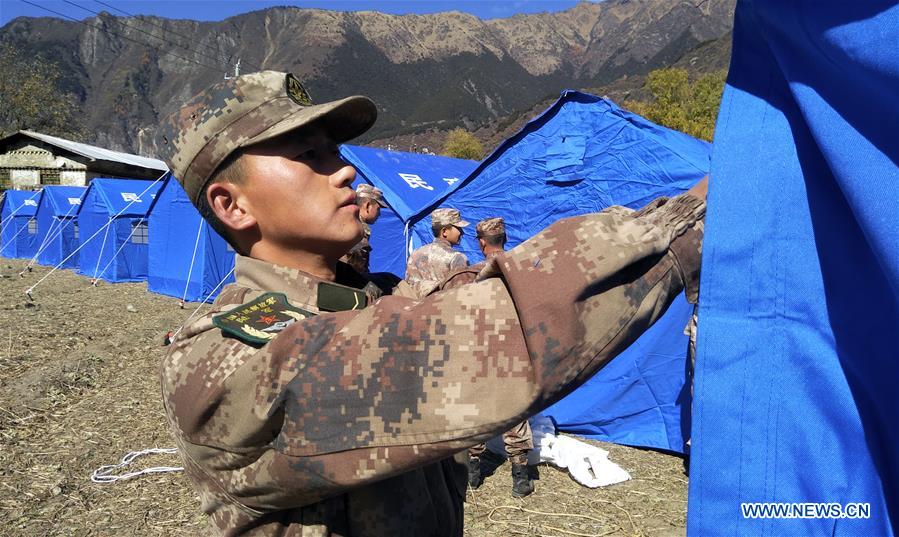 Soldiers put up tents in Zhibai Village in Paizhen Town of Mainling County under Nyingchi City, southwest China's Tibet Autonomous Region, Nov. 18, 2017. No casualties have been reported following a 6.9-magnitude earthquake that hit Nyingchi in southwest China's Tibet Autonomous Region at 6:34 a.m. Saturday. (Xinhua/Jigme Dorje)
In the morning of November 18, a 6.9-magnitude earthquake hit Nyingchi, southwest China's Tibet Autonomous Region. As of press time, 2,992 buildings were damaged, 127 of them severely.
But nobody died.
What could be the reasons for such a miraculous development?
The earthquake was located in canyon areas with a low population density.  One Zhibai village, Nyingchi City resident told the People’s Daily that when the earthquake struck, concern gripped villagers. However, no buildings collapsed, the roads were intact and electric service was spared. And by 10 pm that day, helicopters brought disaster relief.
The quake struck at a depth of about 10 kilometers centered around the Yarlung Zangbo Grand Canyon. Only 23,000 people live in the area.
Furthermore, the area’s infrastructure has improved with high quality, newly-built homes.
On our reporters’ way to Nyingchi, the unblocked roads and smooth communications left a deep impression on them, leaving scant signs that an earthquake had just occurred.
The Party branch secretary of Suosong village, another village affected by earthquake in Nyingchi, told our reporters that the earthquake caused minor damage to the village.
In 2006, Tibet implemented a program to develop a new socialist countryside, with the housing project as a centerpiece. Villages like Suosong have benefitted from the program.
Timely emergency relief and rescue efforts also played a role.
Following the earthquake, the China National Commission for Disaster Reduction and the Ministry of Civil Affairs of China initiated a Level IV emergency response and sent a team to the area. Tibet itself also initiated a Level III emergency response.
Although Zhibai and Suosong villages were spared from serious damage, the emergency response was nevertheless activated.