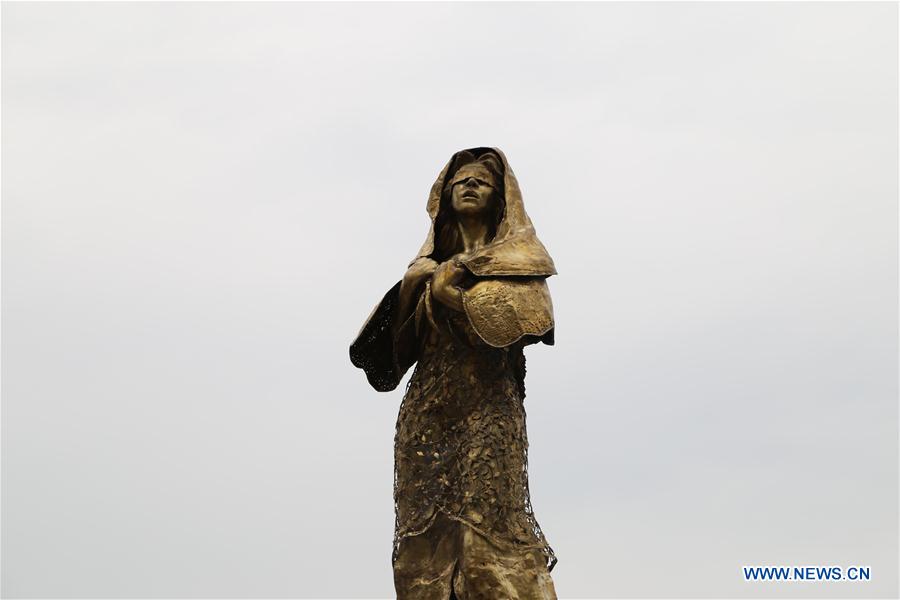 An alliance of Filipino women groups slammed Japan on Sunday for demanding the removal of a "comfort woman" statue, unveilaed earlier this month in the Philippine capital city of Manila. In a statement, the alliance of Filipino women GABRIELA and Lila Pilipina (league of Filipino Women) urged the government to ignore Japan's request to take down the 7-feet bronze sculpture depicting a blindfold, grieving woman in Maria Clara traditional Filipiniana gown. GABRIELA is at the forefront of the Filipino women's struggle for freedom and democracy while Lila Pilipina is an organization of wartime sex slaves. Both groups have demanded justice on behalf of the ageing comfort women in the Philippines, including an official apology from the Japanese government, just compensation, and inclusion of the comfort women issue in Japan's historical accounts and textbooks. Japan has lodged a protest with the Philippines over the erection of a Filipino "comfort woman" statue along a busy street in Manila City, prompting the Department of Foreign Affairs (DFA) to ask the city mayor to explain its decision to install a monument that bears witness to the suffering of Asian women who were sexually enslaved by the Japanese Imperial Armed Forces during World War II. GABRIELA and Lila Pilipina said the DFA "should maintain a sense of dignity for the Philippines by not kowtowing to the whimsical grumblings of the Japanese government after the latter made an issue of having a statue erected in honor and remembrance of Filipino comfort women." "The DFA should assert sovereignty and historical integrity by initiating talks for Japan to officially recognize their history and demands for justice that the former war aggressor has ignored and dismissed as a past better forgotten," the statement read. Both groups urged the Manila City government and the National Historical Commission of the Philippines (NHCP) "to stand a principled ground to keep the statue and host many more actions to raise public awareness about comfort women." The bronze statue was unveiled on Dec. 8 to represent the "comfort women" in the Philippines, who were forced to work as sex slaves for Japanese soldiers during World War II. "This monument is a reminder of the Filipino women who were victims of abuses during the occupation of the Japanese forces from 1942-1945. It took a while before they came out into the open to tell their stories," read the inscription on the monument. The sculpture is the first "comfort woman" statue in the Philippines. It is part of a growing trend of putting up statues dedicated to Japan's wartime sex slaves that have cropped up worldwide in recent years. "Honoring our past and drawing lessons from it are a patriotic right and duty, they are sovereign acts of our nation who want to fight imperialist aggression and work to prevent its repeat," said Gert Libang, GABRIELA vice chair. She added, "Japanese officials for their part should not use their displeasure as a leverage to threaten retaliatory moves if their wishes for the statue are not heeded." The groups said the Japanese Embassy has reminded Manila that "the sisterhood ties between San Francisco in the US and Osaka were severed because of a comfort woman statue erected on private land." "This indicates that Japan may now be issuing unofficial feelers but can soon be open to using multiple private and state mechanisms, including trade sanctions and delays in fund transfers, to make Manila comply with actions until it gets a satisfactory resolution which may end with removal of the statue," the statement said. "GABRIELA and Lila Pilipina want the statue to remain as a reminder that Japan has still not made genuine moves to address the historic injustice done by its military in forcing millions of Asian women serving as sex slaves for invading soldiers," the statement said. Libang said Japan "should honestly do what the comfort women have been demanding for decades, that is official recognition, official apology, and official direct reparations." The Japanese government has officially denied and continues to deny the existence of a "comfort women system."