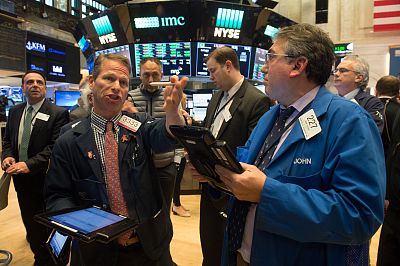 Equity markets around the world slid lower on Friday after US President Donald Trump warned that he could slap another $100 billion of extra tariffs on China's imports, fanning fresh fears of a full-blown trade war between the two superpowers, dealers said.

Meanwhile, data showing a major drop in job creation in the United States was shrugged off as analysts said investors focused on wage growth and how that could feed into rises in interest rates.

Trump ratcheted up on Thursday the rhetoric against China, saying he had instructed his trade officials to "consider whether $100 billion of additional tariffs would be appropriate."

"Dealers are fearful this will result in a full-blown trade war, and equities are feeling the pain," added analyst David Madden at CMC Markets.

The news jarred investor sentiment, which was already fragile before publication of Friday's crucial non-farm payrolls data in the United States.

Wall Street also opened lower, with the Dow dropping 0.9 percent in the first minute of trading.

Asian stocks mostly receded on Friday. Tokyo finished in the red, losing 0.4 percent. There were also losses for Seoul and Sydney, while Shanghai was shut.

Hong Kong however outperformed regional peers with a sizeable 1.1-percent gain, with the market playing catch-up after Thursday's closure.

Markets took in stride data showing that monthly job creation in the United States tumbled in March to its lowest level in six months.

Employers added only 103,000 net new positions, added less than a third of the non farm payroll (NFP) gains in February and far lower than the 175,000 analysts expected.

Market analyst Craig Erlam at Oanda said that traders "were clearly unmoved by what they saw, despite the NFP number being well below expectations."

Instead, "traders are looking for clues that, given the apparent tightness of the labour market, inflationary pressures are building," he said, and thus focused on the figures for average hourly earnings.

While the 0.3 percent monthly rise was above expectations, the 2.7 percent annual gain was in line with what analysts had expected, meaning it is unlikely to push the US Federal Reserve to hike interest rates faster than planned.

"With the jobs report out of the way and holding no surprises of substance, focus will now shift back to trade wars," said Erlam.

China said Friday it is ready to pay "any cost" in a trade war following Trump's threat of an additional $100 billion in tit-for-tat tariffs on Beijing.

"If the US side disregards opposition from China and the international community and insists on carrying out unilateralism and trade protectionism, the Chinese side will take them on until the end at any cost," the commerce ministry said in a statement on its website.

"We don't want a trade war but we aren't afraid of fighting one."

China retaliated on Wednesday against earlier US tariff threats by announcing plans to impose levies on $50 billion worth of major US exports such as soybeans, cars and small aircraft.

On Thursday it launched a World Trade Organization challenge against the US measures.