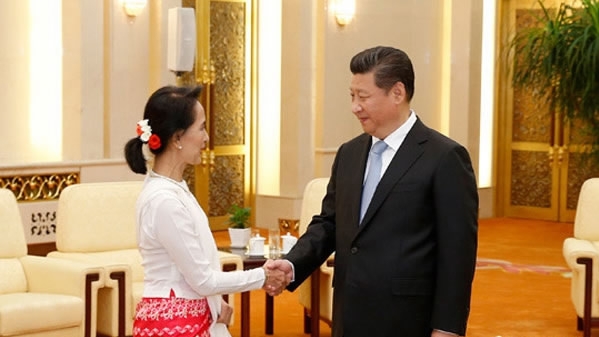 Chinese President Xi Jinping met with Myanmar State Counselor Aung San Suu Kyi in Beijing on Friday, hoping that the ruling parties of the two countries would deepen strategic communication.
Aung San Suu Kyi is here to attend the Communist Party of China (CPC) in Dialogue with World Political Parties High-Level Meeting.
"Since the National League for Democracy (NLD) came to power, I have met with you many times," Xi told Suu Kyi.
The two sides have understood and supported each other and kept close coordination and cooperation on issues involving each other's core interests and major concerns, said Xi, also general secretary of the CPC Central Committee.
The friendly relations between the CPC and the NLD have continued to develop, which consolidates the political foundation of China-Myanmar relations as well as friendship between the two peoples, he said.
The CPC and Chinese government will, as always, adhere to a policy of friendship with Myanmar and view bilateral ties from a strategic height and long-term perspective, said Xi.
He suggested the two sides keep their relations on the right track, implement all the consensus reached by both sides and nurture new growth points, such as discussing the construction of China-Myanmar economic corridor, so as to advance bilateral ties.
He hoped that the ruling parties in China and Myanmar would maintain close communication, share experience on party and state governance, and strengthen political guidance in bilateral relations, making new contributions to the China-Myanmar comprehensive strategic partnership of cooperation.
Xi briefed Aung San Suu Kyi on the major outcomes of the 19th CPC National Congress, saying that the congress report takes the building of a community of shared future for mankind as the objective for China's diplomacy in the new era.
Aung San Suu Kyi, for her part, thanked China for inviting her to attend the CPC in Dialogue with World Political Parties High-Level Meeting.
She said developing relations with China is of particular significance to Myanmar, recalling the long history of friendship between the two countries as well as close cooperation based on mutual trust and respect.
Suu Kyi thanked Xi for attaching great importance to bilateral relations, noting that she has fully felt the sincere friendship of the CPC and Chinese government.
She agreed with China's proposal of building the Myanmar-China economic corridor.
The NLD appreciates the achievements and rich experience of the CPC in party and state governance, and hopes to deepen exchanges with the CPC in this regard, she added.