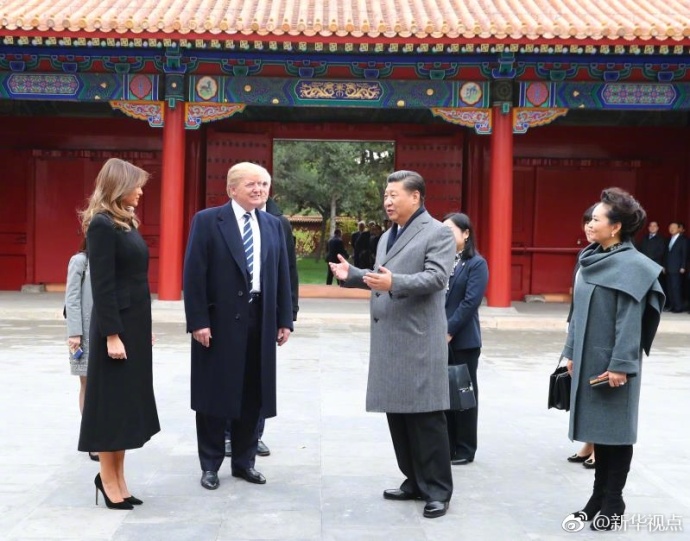 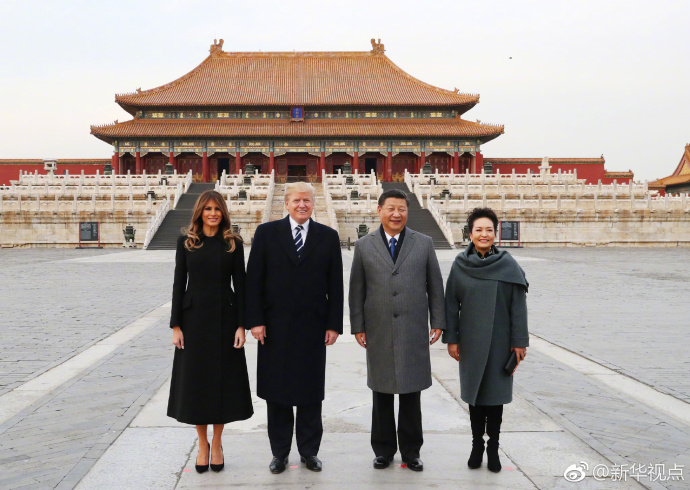 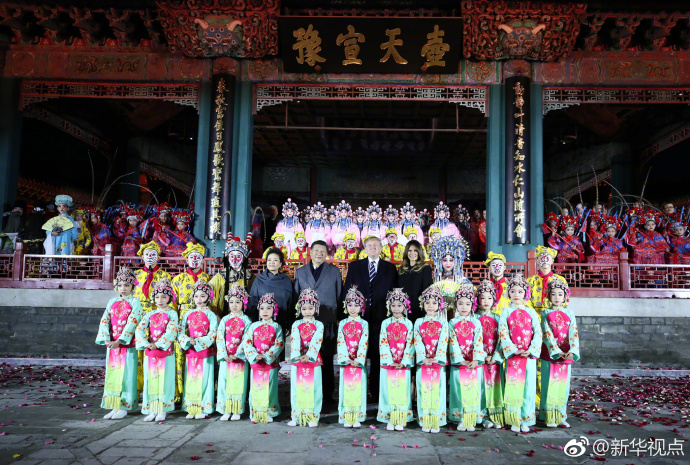 Chinese President Xi Jinping and his wife Peng Liyuan invited U.S. President Donald Trump and his wife Melania Trump to the Palace Museum, also known as the Forbidden City, after the U.S. president started his state visit to China Wednesday afternoon.
Xi and Peng welcomed the guests with afternoon tea at the Hall of Embodied Treasures in the southwestern corner of the Forbidden City.
Xi gave a warm welcome to Trump and expressed his gratitude for the hospitality of the Trump family at the Mar-a-Lago estate when he visited the United States in April.
"I believe the visit will achieve positive and important results with concerted efforts of both sides," Xi said, adding the visit is extensively watched in China and the United States, and other countries around the world.
Xi briefed Trump on China's current economic and social development as well as the important achievements of the landmark 19th National Congress of the Communist Party of China (CPC).
Trump thanked the Chinese side for the considerate arrangements on his visit and offered his congratulations on the successful conclusion of the Party congress and Xi's re-election as the general secretary of the CPC Central Committee.
Over tea, Trump showed Xi and Peng a video of his granddaughter Arabella Kushner singing in Mandarin and reciting ancient Chinese poems.
Xi spoke highly of the child's Chinese skills and said her performance deserved an "A+." He said Arabella was already a child star in China and hoped she would visit China one day.
Built in 1915, the Hall of Embodied Treasures features Western style in the former imperial compound. It was once used to store antiques, but now serves as an exhibition hall for the museum's history.
After leaving the hall, the couples walked along the museum's central axis, which is also the axial line of Beijing, and visited Taihedian, Zhonghedian and Baohedian, the three main halls of the Forbidden City.
In front of Taihedian (the Hall of Supreme Harmony), Xi and Peng took photos with their guests after walking through the Gate of Supreme Harmony.
Taihedian is one of the largest wooden structures in China and the largest hall in the Forbidden City. Emperors of Ming (1368-1644) and Qing (1644-1911) dynasties held enthronements and wedding ceremonies in the hall.
During the tour, Xi briefed the visiting couple on the history, architecture and culture of the museum, noting its importance to Chinese history and culture.
The couples also attended an antiques exhibition and watched some being repaired at the museum conservation workshop, known as "the antiques hospital."
The workshop is the largest cultural heritage conservation center in China. It uses traditional techniques but is equipped with advanced technology.
After leaving the workshop, the guests were led to watch a Peking Opera performance at the Belvedere of Pleasant Sounds, the largest opera theater in the Forbidden City, initially built during the reign of Emperor Qianlong (1736-1795) in the Qing Dynasty to entertain the imperial family.
Peking Opera is one of China's main traditional drama forms and on the UNESCO intangible cultural heritage list. It combines instrumental music, vocal performance, mime, dance and acrobatics.
The presidents and their wives took in pieces from three classic operas: "Spring Seedlings in the Pear Garden," "Monkey King" and "The Drunken Beauty."
They took pictures with the performers after the performance, which drew applause and cheers from the audience.
The Forbidden City, the former residence of China's imperial families during the Ming and Qing dynasties, is a national landmark and a UNESCO World Heritage site.
It covers an area of about 72 hectares.